A Study Reveals that Bilingualism Slows Down Dementia

The experimental data of several studies indicate that bilingualism slows down dementia. Research in various parts of the world has come to the same conclusion: learning a second language keeps the brain young for a longer period of time. 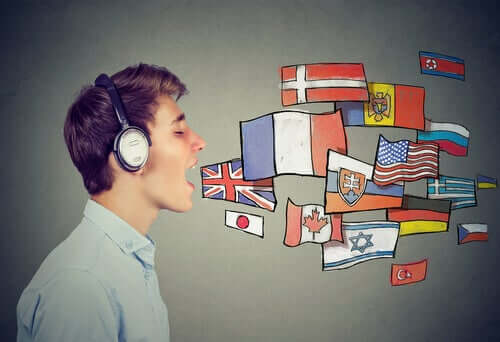 Several studies reveal that bilingualism slows down dementia and Alzheimer’s disease in particular. One of the most prominent investigations was that conducted by Dr. Ellen Bialystok, a professor at York University in Toronto.

Bialystok and her team concluded that learning to speak or speaking another language can delay the onset of Alzheimer’s by up to five years. She based the research on data from the medical records of 200 people diagnosed with the disease.

This isn’t the first time that Dr. Bialystok’s studies reveal that bilingualism protects against dementia. She had already conducted similar research with 184 patients and the conclusions were the same in 2007. According to most professionals, learning a new language is one of the best brain gymnastics a person can do.

Learning and using another language involves the implementation of several complex brain functions. Dr. Bialystok points out that those who speak two or more languages must constantly make decisions about how to express an idea.

More precisely, this means those who are bilingual are constantly exercising the executive functions of the brain. The brain does a kind of gymnastics through these parallelism exercises between the vocabularies and structures of each language.

The executive functions not only make it possible to contrast and translate between the two languages but also provide the basis for the development of other skills and functions. Furthermore, bilingualism slows down dementia and also makes you smarter and more likely to do well at other intellectual tasks.

It’s for all these reasons that Bialystok concluded that bilingualism modifies the way the human brain works. It makes them more efficient. It’s probably this change that delays the onset of Alzheimer’s and other dementias by an average of four to five years.

Have you heard about LATE Dementia? It’s a New Type

Dr. Marco Calabria, professor of the master’s degree in neuropsychology at the Universitat Oberta de Catalunya, also did some research on the relationship between bilingualism and the maintenance or deterioration of brain functions. He argues that the brain of a bilingual person is different from that of a monolingual.

Furthermore, Calabria points out that a bilingual person isn’t the same as the sum of two monolinguals. What a person who speaks two languages develops is a kind of supervisory function. That is a control that guides the mental and motor activities to develop when speaking in one or the other language.

Likewise, he points out that the learning of a second language operates as a cognitive reserve. It isn’t enough to simply learn the language, but necessary to practice it for several years. This is so it becomes a protective factor against dementia and cognitive impairment.

Professor Thomas Bak is a member of the Center for Cognitive Aging and Cognitive Epidemiology at the University of Edinburgh in Scotland. He’s also the author of some research published in the scientific journal Annals of Neurology. Thomas also agrees that learning a second language prevents dementia and slows down cognitive decline.

Bak’s research model is unique in the world. He and his team studied the data of 835 people who took an intelligence test at the age of 11 and the age of 73. (Everyone in the sample was a native English speaker.)

In the second test, 262 people reported being able to communicate in two languages. Among them, 195 had learned the second language before the age of 18 and 65 at a later age. The results revealed that all the bilingual participants also had higher cognitive skills than the others, as well as greater intellectual prowess.

Finally, Bak said that learning a second language definitely slows down cognitive decline. He also points out that this effect is the same in bilinguals and multilingual. Thus, the brain changes in the same way whether you learn two languages or five. The results of all these studies are just another reason to learn another language.

Link copied!
Interesting Articles
Illnesses
Do You Know about the Genetic Basis of Cancer?