Beyond anxiety problems and depression, low serotonin levels have many other associated symptoms. This article presents you with a few of them. 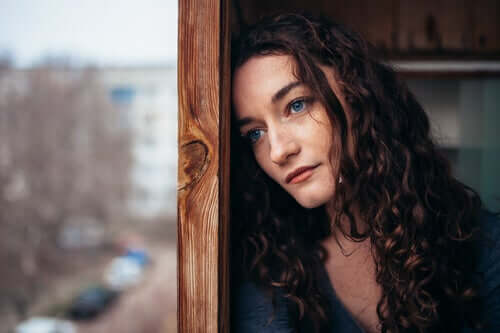 Serotonin is a chemical substance that gives a sensation of overall well-being. However, its functions go far beyond a gratifying emotional state and low serotonin levels could affect your life drastically.

Besides acting as a neurotransmitter within the brain, serotonin also known as 5-hydroxytryptamine (5-HT), can function as a hormone when found in your bloodstream.

This substance influences an immense variety of physical and psychological functions. In fact, it plays a great role in controlling your bone metabolism, liver regeneration, and even your body’s cellular division.

The chemical components found within our body are very fascinating. Thanks to 5-HT, for example, we can count on an internal equilibrium that grants us overall well-being.

Today, we’d like to explain how low serotonin levels can affect your body.

Keep these possible symptoms in mind. Many times, people attribute them to other factors, when in reality a simple imbalance of neurotransmitters and hormones is to blame. However, you should consult your doctor if you think your situation is serious

Peristalsis refers to the muscle contractions that take place throughout our whole digestive tract with a very concrete mission: to effectively move food and liquids through the digestive system.

When levels of serotonin are low, our cells stop producing an adequate amount of calcium. With less calcium, the digestive muscles degenerate and stop contracting efficiently. Hence, our digestion process becomes much heavier and a lot slower.

Almost 95% of serotonin is produced and stored in the intestine. A deficiency in this neurotransmitter causes intestinal function changes.

This makes it possible to experience repeated episodes of constipation. Besides, due to muscle deterioration of the digestive system, it is also very common to suffer from “irritable bowel syndrome” (IBS).

Therefore, under these circumstances, it’s a good idea for your doctor to order blood work and a complete evaluation of your symptoms to be done in order to confirm if your problem in reality is related to low serotonin levels.

If you’ve been going trough a period of decline including muscle weakness, extreme fatigue, moodiness and more infections or colds than usual, don’t hesitate to go to the doctor.

A low serotonin level can also make your immune system ineffective and a lot weaker.

4. Changes To Your Biological Clock

Low serotonin levels can also change your circadian rhythm. In fact, a common symptom experienced is also feeling more sleepy during the day rather than at night time.

In fact, that daily drowsiness is also said to be a common symptom of depression. It’s known that endogenous depressions are caused precisely by a deficit in serotonin.

People suffering from decreased levels of serotonin in their body have a greater need for sodium and therefore crave salty foods. However, this one specific symptom is not enough to immediately diagnose a 5-HT deficit. Other processes must also be present, such as low mood, tiredness, digestive problems…

As we said previously, a deficit of in this chemical is linked to a decline your mood. In fact, there is a direct link between low levels of this chemical and the development of depression.

All of this originates with a lack of receptors able to receive serotonin or tryptophan, an amino acid able to regulate it.

On occasions, if the depression isn’t very serious, measures as simple as improving your diet or practicing a sport can improve your mood. However, in a great majority of cases, you have to use prescription drugs in order to restore serotonin levels.

Read More: 6 Harmful Habits That Can Cause Depression

Our body has at least 14 different serotonin receptors, and the 5-HT1A is the most important of them all. If at some point in your life this receptor isn’t working properly, you’ll immediately notice greater susceptibility, nervousness or anxiety.

As it’s a common problem, you should keep in mind that, many times, anxiety and depression come from chemical imbalances.

Serotonin levels are also linked to the appearance of migraines. The cause of a good part of this type of debilitating headache lies behind tryptophan deficiency. This is the precursor of serotonin that mediates its adequate production.

Read More: Migraine Causes You Might Not Know About

A lack of attention, difficulty concentrating, and problems with retaining information are also associated with a serotonin problem.

These symptoms are very common in people who suffer from depression. This problem tends to improve when pharmacy treatment is obtained to deal with it.

Serotonin is fundamental to well-being

To conclude, the levels of this chemical interfere in many body processes. In fact, the 9 discussed here are just a handful of examples. Therefore, it’s necessary that you consult a physician if you have any problems in this regard.

A good diet, exercise, and taking the appropriate medicines can return your well-being.

How to Prevent Depression due to Lack of Serotonin
To maintain your serotonin levels high, you should eat foods that contain it and live a healthy lifestyle. This is how to prevent depression. Read more »
Link copied!
Interesting Articles
Illnesses
Do You Know about the Genetic Basis of Cancer?