Low serotonin levels can cause changes in your mental health, such as sadness, depression, irritability, trouble sleeping, and aggressivity. 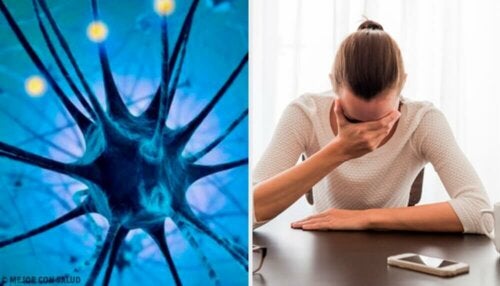 Your health problems or discomforts aren’t always due to a specific disease or condition. It could be, however, because you have low serotonin levels.

This is because, in many cases, the levels of some hormones and neurotransmitters (such as serotonin) are responsible for the discomfort you experience.

Here are some signs that you may have low serotonin levels so you know when it’s time to go to the doctor for a checkup.

Serotonin is a neurotransmitter mostly known for being a hormone that balances your mood. In addition, it’s also responsible for:

Sings you have low serotonin levels

Because it’s involved in a variety of processes in the human body, there are lots of different symptoms when your levels are low.

People with low levels of serotonin usually experience anxiety and there may also be depression in some cases. Furthermore, its low levels can cause:

These symptoms are usually alleviated or disappear when you take medication or adapt a diet to restore its levels.

Serotonin isn’t just associated with digestive processes: in fact, 95% of it is found in your intestines. This is because having too little of this hormone can directly affect your gastrointestinal system, to the point of even developing irritable bowel syndrome. When you increase its levels, however, your condition will return to normal.

Maybe you’re interested in What is generalized anxiety disorder?

3. Emotional hypersensitivity could be because of low serotonin levels

As most people know, this hormone is directly associated with emotional stability. A low level can cause you to be more sensitive than usual. It might reach the point in which any comment or slight feels worse than it actually is.

The body of a person with low levels of serotonin will try to compensate by eating sweets and carbs. In addition, these types of food increase the levels of this hormone in the brain.

That’s why you feel so satisfied when you eat foods that are full of sugar — your levels increase significantly.

We recommend Seven foods that improve your mood

In addition, when serotonin levels are lower than they should be, it starts to affect your daily activities and can lead to fatigue. Therefore, it’s common for people who suffer from low serotonin to experience feelings of:

Too much or too little serotonin can directly affect your libido. This is because your body is naturally attracted by emotion, desire, and excitement.

Everything gets out of whack when you add or eliminate an important hormone such as serotonin.

In addition, a deficit in this hormone can cause a lot of problems at night, such as:

This is because serotonin is part of your biological clock — its function is to help your body rest at night.

When you’re suffering from low serotonin levels, it’s very common to feel highly sensitive to sound. This is because very high levels cause even the quietest noises to seem very exaggerated.

When you have low levels of serotonin, it’s common to suffer from constant mood swings, as well. This is because serotonin is responsible for stabilizing your moods.

That’s why it’s common to see dramatic changes in a person’s mood over a short time, including:

Usually, none of these symptoms are permanent. Once the serotonin in your body is replenished – either naturally or with medications – everything returns to normal.

You think you could have low serotonin levels

Finally, has your doctor indicated you have low serotonin levels? Have you experienced several of the above symptoms? It’s important you take the necessary steps to feel better on a daily basis.

Consider asking for professional help from a psychologist so you can learn to better manage stress, anxiety, and, in general, negative thoughts and emotions. Furthermore, remember that your mental health will largely depend on how much you decide to invest in it. So, don’t leave it last!

6 Foods That Will Help You Increase Your Serotonin Levels
Did you know that the foods you include in your diet can determine your mood? By increasing serotonin levels, we can avoid emotional imbalances. There's a wide variety of foods that, due to their nutritional quality, increase the segregation of serotonin which promotes emotional well-being. Read more »
Link copied!
Interesting Articles
Anatomy and physiology
The Causes of Stained Teeth