Why We Catch Colds

Several factors can influence the onset of colds. However, in general, a cold is a viral infection. Who does it affect? What are the symptoms of a cold? In this article, we’ll tell you all about it! 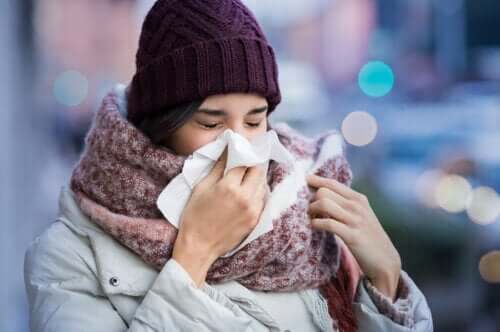 In every place and culture, there are different beliefs about why people catch colds. So much so that, for example, in a large part of the world, it’s mistakenly believed that a cold is associated almost entirely to having endured a cold climate.

Interestingly, Egyptian texts dating back to 1500 BC described colds. Today, due to advances in medical science, we can say what the real causes of colds are and concretely define what happens in the body during a cold.

Therefore, in this article, we’ll explain why people catch colds and everything you need to know about this condition. This way, we’ll debunk some popular myths about this condition, which virtually affects the entire population at some point in their lives.

A cold is actually a viral infection. It’s one of the most common diseases and generally occurs due to rhinovirus and coronavirus. A cold is a self-limiting condition that usually lasts no more than 10 days.

Importantly, although its name may lead to confusion, people don’t catch a cold by enduring the cold. While it’s true that colds and the winter season are related to more cases of colds, this isn’t the reason. In this sense, you should understand that it’s a viral infection.

Colds aren’t caused by the winter. While they’re more common during this season, the real cause is a viral infection.

Colds affect people of all ages. They’re highly contagious viruses that spread easily. The most common symptoms of this viral infection are sneezing and nasal congestion. Other common symptoms are:

When you catch a cold, the virus that caused it can spread in many ways from your body. When you sneeze, cough, or talk, the virus can spread through the atmosphere or reach someone else. The same happens when you share objects or touch a person who has a cold. This is another reason why catching colds has always been associated with enduring the cold. When it’s cold, people tend to take shelter in warm places where there are many people. Thus, contagion is favored.

You might enjoy this article: The Main Differences between a Cold and the Flu

What are the risk factors for colds?

The fact that it’s a viral infection doesn’t rule out that certain factors can make it easier for people to catch colds. This is where we include the fact of having endured the cold or if it’s the winter season.

Firstly, you must understand that, although people catch colds more often in the winter, it can happen at any time of the year. The same occurs with age; anyone can suffer a cold.

However, the incidence in children under the age of six is much higher. This is because hygiene measures at this age aren’t very effective and, above all, due to contact between children at school or while playing.

Colds are more common in children, since school environments facilitate the spread of the virus.

Another risk factor by which people catch colds more often is having a weak immune system. Having suffered an illness recently or having a chronic disease significantly affect.

The immune system depends on many elements and substances, which is why it’s exposed to numerous changes and deficits that may weaken it. For example, not getting enough sleep or having a vitamin C deficiency.

It’s been proven that tobacco smoke also predisposes people to catch colds. Both active and passive smokers are more likely to catch a cold. The reason for this is that tobacco smoke damages the mucous membranes of the respiratory tract and facilitates the entry of the virus into the body.

This article may interest you: 7 Natural Ways to Boost Your Immune System and Prevent Colds and the Flu

People catch colds due to a viral infection. It’s important to understand that, although the cold or winter are risk factors, they’re not the real causes of colds.