What is Musical Ear Syndrome and How is it Treated?

You might have musical ear syndrome if you suddenly hear music and you don't know where it's coming from. This is a problem with many different causes. Learn more in this article! 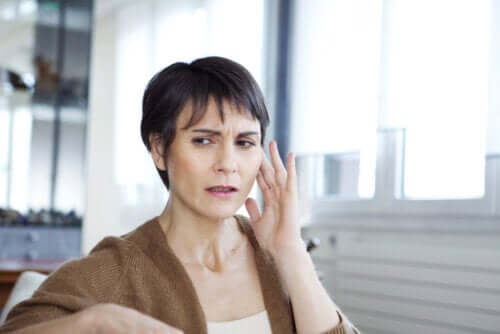 Everyone’s experienced ringing in their ears at one point or another. However, it might be musical ear syndrome if the ringing is an actual melody no one else can hear. This is also known as tinnitus and affects far more people than you might think.

For example, approximately 15% of the population suffers from musical ear syndrome in the US alone, according to the American Tinnitus Association (ATA). This percentage is definitely a sign of how important it is to know it in greater depth.

You already have an idea of what musical hearing syndrome is but we’re going to explain it in more detail, as many people aren’t familiar with it. We’ll base this content on the article “Frequently Seen But Rarely Diagnosed: Musical Ear Syndrome.” This syndrome is known by its acronym: MES.

This condition is a type of disability. However, it isn’t psychiatric, but an auditory one as it concerns music and melodies or music people perceive, a kind of hallucination. The article also mentions that this condition has to do with Charles Bonnet syndrome.

Charles Bonnet syndrome consists of visual hallucinations. People with this disability experience them as a result of irreversible myopia or near-blindness. Well, the musical ear syndrome is similar, only it affects the ear instead of the eye.

How common is it?

We already mentioned that approximately 15% of the U.S. population experiences musical ear syndrome. However, the numbers are even more alarming according to a survey conducted by the Centers for Disease Control and Prevention (CDC). In fact, they say that about 20 million Americans have to deal with this syndrome regularly.

Also, there are claims that about two million people experience severe forms of musical tinnitus. This means they have to deal with it daily and this affects their lives, social relationships, and the way they function.

Other data presented by the ATA indicates that tinnitus is more frequent in men than in women, as well as among older people and music lovers (or musicians). However, those who work in environments where there’s a lot of noise and those who’ve held military positions also fall into this category.

Musical ear syndrome doesn’t arise out of nowhere. This is why there are different identified causes, such as hyperacusis. People who’ve been exposed to high volumes of sound for a long time may experience this problem.

Also, the reason for it affecting older people is hearing loss. As with Charles Bonnet syndrome, hallucinations may appear in an attempt to compensate for the decrease in function when a sense begins to fade.

As the article mentioned above explains, researchers believe the cause of phantom sounds is hypersensitivity in the auditory cortex. It isn’t buzzing or whistling in this case, but melodies and songs. In other words, auditory hallucinations.

Find out how to Protect Your Hearing: When Was Your Last Checkup?

There are different ways to treat musical ear syndrome. One of them is to manage the stress that causes hallucinations due to anxiety about hearing loss. Practicing yoga, meditation, pilates, and physical activity can be of great help.

The use of hearing aids, in cases where they may be helpful, also reduces hallucinations caused by musical ear syndrome. Another way is to add more noise. Playing music at home or having the television on are ways for the ear to stop hallucinating and focus on sounds that are really there.

The last option is the use of drugs prescribed by the doctor. This should be the last approach when nothing else works so that the patient can go on with their lives and not be frustrated.

Musical ear syndrome is a hallucination

You’ve probably experienced ringing and buzzing in your ears, but perhaps you had no idea that there’s such a thing as auditory hallucinations. Fortunately, it’s possible to treat them thanks to the different options available today.

Have you ever experienced this phenomenon? Has anyone close to you?

Try These Natural Remedies for Tinnitus
Tinnitus is a condition that makes it seem like you have a ringing sound in your ears. Learn some natural remedies for this in this article! Read more »
Link copied!
Interesting Articles
Illnesses
Joan Massagué and the Origin of Cancer Metastasis