What Is Disinhibited Social Engagement Disorder in Children?

Disinhibited social engagement disorder (DSED) is characterized by an exaggerated trust in strangers. This can lead to dangerous situations, especially when it comes to children. Discover the most frequent symptoms, causes, and treatments. 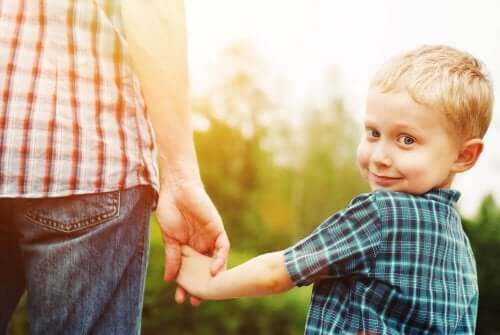 Have you ever heard of disinhibited social engagement disorder (DSED) in children? This disorder refers to a behavioral pattern in children who actively approach and interact with strangers without any sense of caution or fear. In some cases, this disorder is related to attention deficit hyperactivity disorder (ADHD).

In the following article, we’ll talk about the symptoms and causes of this disorder. What’s more, we’ll also share talk about some treatment options for this disorder that exclusively affects children.

How to recognize this disorder

First of all, these are some of the frequent signs that may help detect and diagnose this disorder in children:

As you can imagine, children that suffer from this disorder are at great risk on a daily basis given their willingness to go off with strangers. What’s more, they may have a hard time connecting on an emotional level with their peers and family members.

Read also: Teach a Child What to Do if They Get Lost

When should you talk to your doctor?

In order to determine if you should see a doctor, ask yourself the following questions:

What does DSED have to do with ADHD?

Disinhibited social engagement disorder in children can have factors in common with attention deficit hyperactivity disorder, according to some psychiatric specialists. However, it’s important to know the difference between the two.

The common ground between these two disorders is an excessive and inappropriate friendliness toward strangers. At the same time, both disorders involve difficulty establishing limits in social relations. However, ADHD is not associated with a lack of attachment in the early stages of life.

Read also: Types of Attachment in a Relationship

What’s the cause of disinhibited social engagement disorder?

In some cases, experts point to a lack of attention toward the child during the early stages of life, including infancy. This lack of attachment can later lead to disinhibited social engagement disorder in children. But other factors can also lead to this disorder, including living in orphanages or shelters from a young age.

However, while a lack of attention in early childhood increases a child’s chances of developing DSED, not all children who develop the disorder experienced neglect. In fact, the disorder is also associated with unstable or inconsistent family environments as well as with traumatic events.

Disinhibited social engagement disorder is treatable on a psychological level once a specialist evaluates both the child and his or her family. Then, the specialist can establish an individualized treatment.

The treatment will always aim to make the child feel comfortable in his or her daily environment. And it may involve activities like playing and drawing. The objective will be to support the family, facilitate understanding of the disorder, and strengthen the parent-child bond.

When will the child begin to show signs of improvement?

However, it’s impossible to say how soon children will manage to achieve a healthy and positive development on a social and emotional level, and begin to feel cared for and protected in their immediate surroundings. Therefore, the duration of treatment will vary according to each child, as well as to his or her age.

Childhood Attachment and its Importance in Adult Life
Childhood attachment is the emotional and behavioral bond that’s established in the early stages of human life. It is fundamental for children. Read more »
Link copied!
Interesting Articles
Children
4 Habits that Affect a Child's Brain Development

Wellness
Mental Health: What Can Help?

Mental health is about overall psychological wellbeing. This includes one's own sense of wellbeing and a good ability to process feelings and manage relationships. People with good mental health are…

Medication
The Uses and Effectiveness of Retapamulin