What Exactly Is a Lung Nodule?

Infections are the main cause of a lung nodule but doctors must always rule out cancer. 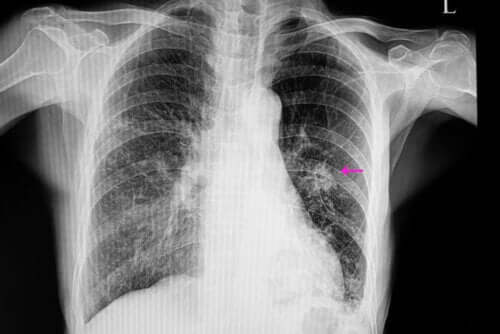 Cancer might be the first thing that comes to your mind when you hear that someone has a lung nodule. However, this is a benign condition most of the time, even though there could be a link between both illnesses.

A lung nodule is a mass that measures between five and thirty millimeters. It’s an increasingly frequent condition and current estimates indicate it affects around 0.2% of the population. The good news is that almost 60% of these nodules are benign.

The causes of this disease range from an infection to a tumor. Most of the latter are found accidentally when performing a CT scan (computed tomography) or an x-ray.

It’s important to diagnose this situation early on in order to avoid complications and rule out something more serious. Thus, in today’s article, we’ll explain everything you need to know about a lung nodule and what its symptoms are.

As we mentioned above, a lung nodule is a mass in the lung and its causes vary. Most of them are due to an infection — either bacterial, fungal, or parasitical.

In regard to infectious causes, note that lung nodules are common in people with tuberculosis infection. Yes, it still happens even though its incidence is low.

Currently, the first thing a doctor will do is to rule out whether the lung nodule is carcinogenic. This is because lung cancer is one of the most frequent cancers.

In such cases, the nodules will have an irregular appearance with poorly defined edges; this is visible in the x-ray. Also, they’re usually smaller than the benign ones. In addition, they’re part of certain risk factors, such as:

However, it’s important to know that not all neoplastic lung nodules are malignant. There are some benign ones, although these are less frequent than the former.

Other causes of lung nodule

There are many other diseases that can result from this lung disorder. For example, certain autoimmune processes such as Wegener’s granulomatosis or rheumatoid nodule. Both are rare though.

Similarly, lung nodules may appear due to trauma in some people. This is most likely to be due to a metabolic disease called amyloidosis or after the appearance of a bronchial cyst.

How do doctors diagnose a lung nodule?

Firstly, it’s essential to have a complete medical history of a person in order to diagnose a lung nodule and determine its cause. A patient must know if they previously had TB or if they’ve been exposed to certain infections or infected people.

It’s also important to know whether they’re smokers or not. Many studies revealed that a large part of lung nodules are carcinogenic and related to smoking.

Once this is done, a doctor must perform certain imaging tests to locate the nodule. In addition, the images will allow them to observe certain characteristics such as shape and size. This is because they’re important for differentiating a benign nodule from a possibly malignant one.

The most common ways to diagnose them are via chest x-rays and computed tomographies. In order to find out the exact cause of a lung nodule, physicians also do biopsies sometimes, as these allow them to analyze the tissue.

You may be interested: Scientists Discover Nanoparticles from Tea Leaves that Kill Lung Cancer Cells

The treatment to follow will depend on the cause of the lung nodule. Firstly, it may or may not require antibiotics or antifungals when it’s due to an infectious process.

When the cause is unclear, the treatment will focus on the patient’s risk of cancer. For example, young non-smokers whose nodule doesn’t appear to be malignant may only go in for periodical checkups. Mainly to check if the nodule is changing or growing.

Similarly, if there’s a risk of cancer, then it’s important that the doctor follows up with a biopsy. Afterward, if it was indeed carcinogenic, they’ll have to schedule surgery to remove it. When surgery isn’t feasible they may suggest chemotherapy or radiotherapy.

Finally, we must highlight the negative impact of tobacco in the lungs. You must be conscious of the risk involved and get frequent medical checkups to diagnose this type of pathology as soon as possible.