What Are the Types of Cerebral Palsy?

The types of cerebral palsy vary, as do their symptoms, the part of the brain affected, and the severity. It's a complex disorder that doesn't have a good evolutionary prognosis, but researchers continue to look for ways to improve the quality of life for those affected. 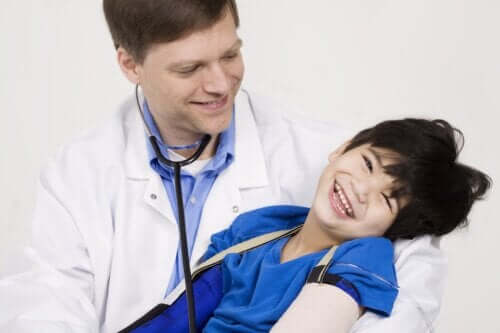 The different types of cerebral palsy that exist have different medical classifications that aid their management and diagnosis. However, each case is a serious condition in its own right, especially when present in children.

In medical terms, cerebral palsy refers to a group of disorders that affect muscular mobility, and which are caused by damage in the individual’s brain. Additionally, the condition can extend to other parts of the nervous system, as well as other variables.

In this article, we’ll discuss the different types of this disorder in order to understand it better. One type of this disorder is categorized by how affected the individual’s posture is, whilst others are determined by the part of the body they affect. They can also be rated by their severity.

Classification by muscle tone and posture

In this category of cerebral palsy, most commonly the individual’s posture varies. This is directly related to their muscle tone, and can cause spasms, involuntary movements, or ataxia.

Cerebral palsy occurs due to localized damage in the brain, which affects muscular movement.

This is the most common type of cerebral palsy. The muscles in people affected by this type are in an exaggerated state of tension and their reflexes are weak. People with spastic cerebral palsy can’t walk properly. They’re only able to drag their lower limbs due a loss of joint mobility.

Contrary to what we described in the previous section, people with this kind of cerebral palsy have very little muscle mass. Their muscles don’t stay contracted and the person is unable to stay upright with their limbs relaxed, and they have no strength.

The biggest risk for those with this type of cerebral palsy is how it affects their respiratory system; both the children and adults affected have difficulties with how their chests work.

This type of cerebral palsy causes chaotic movement in the entire body. The muscles involuntarily contract and relax in both the superior and inferior limbs.

In regards to the face, this type of cerebral palsy tends to be located in the tongue, and as such, facial expressions tend to change abruptly when a spasm arises.

Ataxic cerebral palsy is similar to the athetoid variation, but is far less common; the latter is more stereotypical. The movements here also appear involuntarily and at random. Those affected struggle with their balance, both when sitting and standing.

Mixed cerebral palsy is no more than a combination of the aforementioned symptoms. Diagnosis is difficult, though, since the medical specialists that encounter this problem aren’t always sure which diagnosis best fits the patient.

Types of cerebral palsy determined by the affected body part

The type of cerebral palsy and its classification depends on which part of the body it affects or presents the most symptoms. The different classifications are:

Cerebral palsy can also be classified by the part of the body it affects.

This method of classifying cerebral palsy is based on an international consensus, as presented in the Gross Motor Function Classification System (GMFCS). This is as agreed between the World Health Organisation (WHO) and the Surveillance of Cerebral Palsy in Europe (SCPE).

Based on the criteria determined by the consensus, we can discuss the following types:

There aren’t any types of cerebral palsy that are ‘better’ than the others. Therefore, each kind meets a specific criteria. In some cases, cerebral palsy responds better to rehabilitation therapies, whereas others require a more medical approach.

An accurate diagnosis is essential, as it helps specialists to develop a detailed rehabilitation plan to improve the quality of life through physiotherapy, psychosocial support, support networks, and also medical treatment.

Everything You Need to Know About Cerebral Palsy
Find out more about cerebral palsy, a disability caused by a brain injury. It limits the person's activity because it affects both mobility and posture. Read more »
Link copied!
Interesting Articles
Illnesses
Causes, Symptoms, and Treatment for Gelastic Epilepsy