What the Way You Walk Says About You

If you pay attention to the way you walk, you can detect aspects related to health problems or your own sexuality. 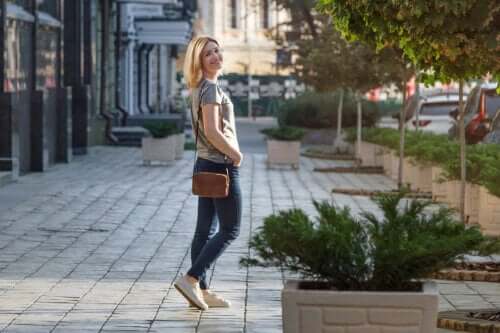 Some people see someone walking down the street and think that this determines who they are. However, they’re only assumptions; the truth is that the way you walk doesn’t establish who you are.

Nevertheless, certain health-related aspects can be detected by the way you walk. From the risk of certain cognitive conditions to the menstrual cycle phase you’re in. Next, we detail them in depth.

What the way you walk says about you

The way you walk can indicate some clues about the person, but doesn’t determine it. Therefore, don’t be guided only by what you see.

You’re in a hurry

The journal Cognition published a study in 2015 related to a person’s agitation levels. This research was conducted at the University of Kent and observed the behaviors of people who were blindfolded.

Study participants were asked to walk in a straight line toward a target they had previously seen. Furthermore, they also completed a survey to determine if they had a nervous or calm tendency.

The study came to the following conclusion: people who are more nervous turn to the left more often than those who are more relaxed. Within this line of research, the following study published by the Revista Mexicana de Neurosciencia indicates that the right hemisphere is where anxiety generally develops.

Therefore, it’s believed that activity in the right hemisphere of the brain is responsible for this shift.

You may have a risk of dementia

Your walk could give you some clues that you’re in the early stages of dementia.

According to a 2014 study, researchers at the American Academy of Neurology identified a condition known as motoric cognitive risk syndrome (MCR).

MCR is characterized by cognitive abnormalities. In other words, there’s a relationship between decreased memory and walking at a slow speed.

The study examined 26,802 adults aged 60 years or older and found that 10% of them met the criteria for MCR. After making this observation, the researchers followed both normal adults and those who were MCR-positive.

Participants who were diagnosed with MCR were twice as likely to develop dementia in the next 10 years, compared with those who were considered to be healthy.

A team of researchers in Belgium found that the way a woman moves her body when she walks can indicate if she recently had a vaginal orgasm.

The study was published in the Journal of Sexual Medicine. They examined the sexual history of healthy women and tried to “guess” whether they had experienced a vaginal orgasm or not.

Sexologists examined the attitudes of the women and were surprisingly able to correctly guess the orgasm history of 81.25%.

Thus, researchers believe that women who’ve had or are able to achieve a vaginal orgasm have a greater range of motion and their pelvis achieves a greater stride length.

The journal Personality and Individual Differences published a study suggesting that men are more attracted by the movements of a woman, especially if she’s dancing or walking during her most fertile time of the month.

German researchers recruited 46 women and recorded whether they were in a fertile or non-fertile phase. The researchers then recorded videos of the women as they danced or walked.

A group of men screened the recorded videos. Men rated the movements of the women in their fertile phase as more attractive than those who weren’t.

Thus, the researchers concluded that the results suggest that women in this stage of their menstrual cycle send out certain signals through the movements of their body.

We recommend you read: Why Dance Therapy Is So Good for You

Your body is always speaking to you

As you can see, the way you walk says many things about what’s going on inside. It can be anything from medical aspects like dementia to less concerning things like your sexuality.

In any case, don’t forget to consult your doctor if you have any questions. We hope this information was useful, and remember to keep walking to keep yourself in optimal condition.