Vegetative State: Everything You Need to Know

Vegetative state is a disorder that occurs when only a patient’s primitive brain remains active and they stop being aware of themselves and the environment. In this article, learn what is is, as well as its symptoms, diagnosis, and prognosis. 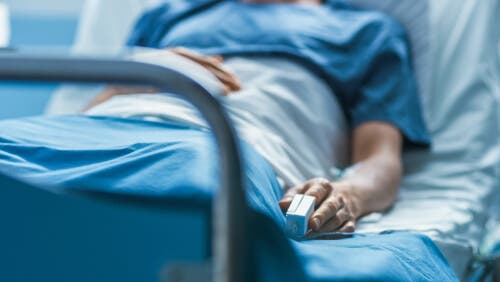 Many alterations can affect a person’s level of consciousness. Vegetative states occupy a prominent place in this broad topic. Formerly, a vegetative state was used to refer to unconscious patients whose vital functions were generally substituted.

It wasn’t until the 1970s when two renowned neurologists, Brian Jennet and Freud Plum, scientifically described the condition. Since then, experts have published multiple articles where they analyze the vegetative state from different angles. In fact, some controversies are still under discussion.

In this article, we’ll explain the most important aspects that you should know about the vegetative state.

To better explain it, we’re going to divide the brain into two parts, depending on what they control:

A vegetative state is a long-lasting disorder that occurs when the brain hemispheres stop working. Therefore, the person ceases to be aware of themselves and the environment. However, the most primitive brain, which continues its vital functions, isn’t affected.

“A persistent vegetative state is a complex neurological condition in which patients appear to be awake but show no sign of awareness of themselves or their environment.” -Monti et al., 2010

The causes of a vegetative state

There are several causes of vegetative state since any disorder that leads to brain damage can cause it.

The most common causes are:

Other causes can be tumors, hemorrhages, brain infections, and the final stages of dementia, such as Alzheimer’s, among others. These disorders don’t harm the primitive brain, but they do damage the cerebral cortex.

This article may interest you: What Are the Different Lobes of the Brain?

People in a vegetative state can do some things that can make you believe that they’re aware, such as:

However, the primitive brain carries out these reactions without any awareness. They’re the result of basic involuntary reflexes that all humans have.

How can doctors know that they’re not conscious?

To determine if someone is conscious, there must be intention in their actions. This intention indicates that they’re relating to their external environment:

Therefore, the patient isn’t aware of anything but their heart and lungs continue to function. In other words, they can maintain their blood pressure and cardiorespiratory functions.

Imaging tests can help discover which part of the brain has been affected and see if it can be treated. To see if there’s any kind of consciousness, doctors resort to tests such as functional magnetic resonance imaging (fMRI) or electroencephalogram (EEG).

Unfortunately, these tests can’t detect the patient’s level of consciousness. They only detect if there’s consciousness that can’t be determined with the naked eye. These results may affect decisions about long-term care and the possibility or not of recovery.

Generally, after more than a month, it’s considered to be a persistent vegetative state. However, experts established that the cause of the vegetative state, its duration, and the patient’s age are the factors that can change the prognosis.

Some recovery may appear. However, it’s typically minimal, with large residual consequences and a poor quality of life.

People in a vegetative state need comprehensive care. Above all, doctors and care workers must provide the following measures:

The possibility of non-recovery

It’s unlikely that these patients will recover. Doctors, relatives, and, sometimes the hospital ethics committee, must discuss how the patient will be treated.

Also, the patient’s wishes about these treatments must be considered, if they’re known or specified in their will.

Concussion: Symptoms, Diagnosis and Treatment
A concussion is a type of injury that involves the loss of normal brain function for a short period of time. Read more »
Link copied!
Interesting Articles
Illnesses
Open-Angle Glaucoma: What Does it Consist Of?