Vascular perforation is an uncommon complication. In this article, learn more about the different types of catheters and what may cause this rare problem. 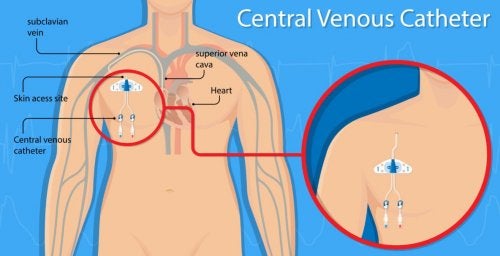 Central venous catheter access can cause an injury toward surrounding structures if not performed properly. For instance, vascular perforation could happen due to the displacement of the tip of the catheter. Fortunately, however, vascular perforation is an uncommon complication. Only 10% of the perforations take place in central veins

However, when it does occur, it isn’t usually diagnosed until is too late. Therefore, it can be dangerous. That’s why we’d like to take a closer look at this injury and how to detect it in this article.

The design of these catheters makes it so that they extend into the largest central vein near the heart. Catheters vary in size, length, and number of channels, depending on the use for which they were thought of.

Overall, these are the main types of vascular access catheters:

This is a long catheter that extends into the largest vein near the heart from a vein in an arm or a leg. They’re also referred to as “midline catheters” when placed in such a way that the tip of the catheter stays in a relatively large vein. However, it doesn’t extend into the larger vein.

The non-tunneled central catheter may have a larger caliber and is meant to be placed in a relatively large vein. This includes a central vein such as the jugular, in the neck, or the femoral vein, in the groin.

This one may have a cuff that stimulates tissue growth that helps keep it in place in the body. There are different sizes and types of tunneled catheters. Its security and easy access are some of the main characteristics of a tunneled catheter.

This is a permanent device consisting of a catheter coupled to a small reservoir.

An ultrasound is commonly used for evaluating and identifying a suitable vein to place a catheter. It allows the intervention radiologist to identify them faster.

The risk of vascular perforation

The diagnostic test of choice when it comes to vascular perforation at the central level is computed tomography.

There are two types of risks directly related to vascular access catheters:

Some of these risks are:

You may also be interested: Central venous catheters: concept and precautions

Infection due to vascular perforation

When you use a vascular access catheter, two types of late infection can occur:

When a professional doesn’t properly attach a catheter to the skin, there is a chance it will accidentally come out. If this happens, you should apply pressure to the incision site with a sterile dressing and notify your doctor as soon as possible.

Also, any type of vascular access catheter could clog with a blood clot. You can treat the clot with a blood thinner, but sometimes the physician will have to remove the catheter.

The most obvious sign that there may be a problem with the catheter is a feeling of irregular heartbeat. If you experience this, contact your doctor. However, catheters are overall very safe.

Infusion Pump: Uses and Patient Care
The infusion pump is a system that infuses drugs directly into the patient's bloodstream. Read all about it in this article! Read more »
Link copied!
Interesting Articles
Illnesses
Open-Angle Glaucoma: What Does it Consist Of?