The symptoms of urogenital atrophy often affect patients emotionally and affect their quality of life. 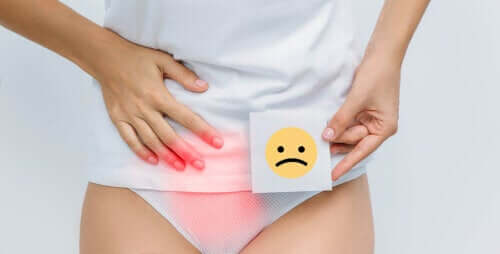 Urogenital atrophy is one of the possible consequences of entering the menopausal stage. Although it’s not as well known as hot flashes or mood changes, urogenital atrophy has many repercussions that can directly affect women’s quality of life.

Life expectancy in recent years has increased considerably and, with it, so have the years that women have to live with menopause. The decrease in estrogen that occurs at this stage of life can lead to several illnesses and conditions. It’s estimated that after five years of menopause, up to a third of women suffer some degree of urogenital atrophy.

Before we take a closer look at this condition and its symptoms, it’s important to understand the role of estrogen.

The functions of various types of estrogen in women

Estrogens are primarily female steroid sex hormones that are produced in the ovaries and the adrenal glands. They’re responsible for the development of secondary female sexual characteristics. Among them we find:

The period of puberty and sexual maturity in women begins when the production of estrogens rises. As a result, the body stimulates growth in the uterus, vagina, endometrium, and Fallopian tubes. The level of these hormones remains more or less stable until the arrival of menopause. At this point, there’s a drastic drop in these hormones.

In addition to controlling the development of secondary female characteristics, they also have other functions such as:

You may also be interested in reading: 5 Causes For Vaginal Itching That Are Not an Infection

What are the symptoms of urogenital atrophy?

The symptoms of urogenital atrophy often affect patients emotionally and, as we said before, can affect their quality of life. Unlike other menopause symptoms, urogenital atrophy persists over time and can become more severe if not properly treated.

The drop in estrogen during menopause has a major impact on vaginal health. Changes occur in vaginal pH that favor both vaginal and urinary infections.

The network of vessels that nourish the vaginal mucosa decreases. As a consequence, lubrication decreases. This lack of lubrication can lead to frequent irritation, dryness, and dyspareunia. Dyspareunia is defined as pain suffered during sexual intercourse.

Finally, the vaginal mucosa becomes thin and fragile, and there’s an increased risk of injury in normally safe procedures such as the insertion of a speculum during a vaginal examination, or during sexual intercourse itself.

Read also: What Do Sex Hormones Do?

Several very effective treatments can help slow down, decrease, or even improve the symptoms related to urogenital atrophy.

First, there are vaginal moisturizers and lubricants. These, helped by lubricants during sexual intercourse, are the first line of treatment for patients who have mild or moderate symptoms. These products reduce the symptoms of dryness and restore the pH, but they can’t reverse the changes in the mucous membranes.

On the other hand, there are hormonal treatments. This line of treatment is considered to be the best choice for women who suffer from moderate to intense symptoms.

Hormone treatment can reverse the changes caused by the hormone deficit during menopause. Administration can be systemic, oral, or vaginal. Low doses of estrogen administered locally are the first choice of hormonal drug treatment.

Finally, a change in lifestyle and non-hormonal treatment are considered to be the best options to treat the symptoms of urogenital atrophy. This is especially the case in women with minimal changes or mild symptoms and in women who either don’t want to or can’t use estrogen.