Eating a FODMAP diet, controlling antibiotics and regenerating flora are some of the options for treating bacterial overgrowth. What else do you need to know about it? We have all the information you need right here! 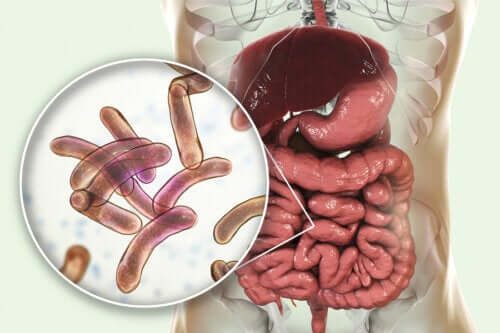 Do you suffer from gastrointestinal symptoms such as abdominal pain or diarrhea? You may be suffering from bacterial overgrowth in your small intestine. This condition isn’t normal, and in this article we’ll explain the treatment and the most typical mistakes people make.

Bacterial overgrowth in the small intestine

The gastrointestinal symptoms it can produce are diverse and nonspecific, such as:

What makes this syndrome so particular is that, unlike the large intestine, the small intestine shouldn’t have a large number of bacteria. Specialists believe that the few bacteria that are housed there have been there since birth, living in symbiosis with our intestine.

Little by little, we’re getting a more profound understanding of this relationship and we’re understanding that it’s vital to achieve a normal digestive process, an efficient activity in the immune system, and an optimal development of our intestine.

The problem comes when these bacteria overgrow. For example, one of the reasons for this bacterial overgrowth may be the excessive intake of foods rich in FODMAPs.

To maintain a good ecosystem of microorganisms along the digestive tract, and thus avoid bacterial overgrowth, the human body uses antibiotic mechanisms such as:

Also read: The Best Food to Eat for an Upset Stomach

A good complementary diagnostic test is the hydrogen breath test. This test is based on the fact that certain gases, such as hydrogen or human methane, are produced by the fermentation of carbohydrates by intestinal bacteria. So if the exhalation of these gases occurs too quickly, we know we’re dealing with bacterial overgrowth.

Conventional treatment includes identification of the conditions causing the symptomatology and treatment with antibiotics. However, we can’t forget a fundamental part: controlling our diet. To do so, we suggest you:

You may like: Medicinal Herbs that Help Relieve Stomach Pain

If you suffer from bloating and steatorrhea (fat in the stools), doctors often diagnose you as suffering from bacterial overgrowth. But these same symptoms can be due to:

Therefore, it’s crucial to have a proper diagnosis, based not only on the symptoms, but on all the processes that have led you to suffer the medical condition you have.

2. Treating with antibiotics for too long

Although using some antibiotic treatments is natural, using them for too long can affect the symbiotic bacteria. It can damage the diversity of the flora and make it difficult for the person to live without treatment, since it’s the variety of species of our microbiota that regulates the overgrowth.

3. Diets that are too restrictive for too long a period of time

In the first phase, you should follow a FODMAP diet, as it’ll help you control the overgrowth. However, you must remember that fiber is our bacteria’s food, they’re our prebiotics. Restricting them for too long can also affect the diversity of flora.

4. Terminating the treatment when the symptoms disappear

In addition, once the bacterial overgrowth has been resolved, we must focus on recovering the control mechanisms that have led to this overgrowth. The treatment will be finalized when hypochlorhydria, pancreatic insufficiency, or the need for antacids are resolved, and not only when the symptoms have disappeared.

To summarize, to treat bacterial overgrowth, you first of all need to reduce the excessive intake of foods rich in FODMAPs. In addition, treatment may include antibiotics and other therapeutic options. In any case, the success of the treatment depends largely on a good diagnosis by the physician.

Aloe Vera Remedy With Honey For Stomach Problems
With a little honey, you can make an ideal aloe vera remedy to make those uncomfortable symptoms disappear. Learn how in this article! Read more »
Link copied!
Interesting Articles
Illnesses
Can Celiac Disease Cause Infertility?