Ear infections are common in children who are between 0-5 years old. Early detection of symptoms and subsequent treatment will ensure their recovery in just a few days. 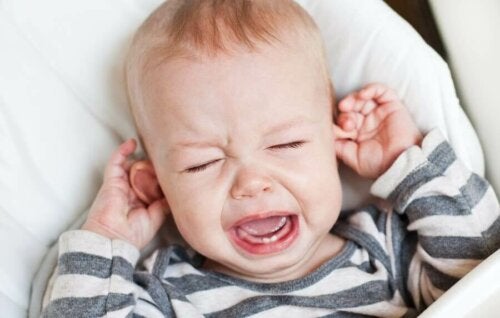 Having an ear infection is common in babies and children. In fact, nearly half of them get at least one ear infection during their first year of life. Also, it’s the most common cause, besides tonsillitis, for which a pediatrician would prescribe antibiotics to a child.

Most colds and throat infections take place around winter. Furthermore, children with allergy problems and who live around smokers are more likely to have them.

How to detect an ear infection in babies

You may not know this, but otitis media, a group of inflammatory diseases of the middle ear, is caused by the entry of bacteria or viruses from the oral cavity into the air space of the middle ear. In addition, the abnormal multiplication of microorganisms in the area generates pus and a distended eardrum, causing pain to the child.

This infection is more common when there’s a catarrhal process going on. This is because the duct is usually full of mucus and there are perfect conditions for the excessive growth of viruses and bacteria.

Symptoms of ear infection in babies

The symptoms of this condition often depend on the age of the child afflicted by it. In the case of babies, it manifests as irritability, feeding rejection due to loss of appetite, vomiting, and even suppuration in the external ear in more advanced infections. The pain usually increases when they’re asleep because of the pressure of the ear increases in a horizontal position. There may also be fever and chills.

It’s important to be able to recognize the symptoms of this infection in the early stages in order to apply the appropriate treatment as soon as possible. It’ll speed up the recovery help prevent complications.

Read about Honey and Babies: A Dangerous Combination

It’s very important that you don’t try to diagnose it on your own; instead, consult a doctor if you suspect any infection. The following remedies are only a complement to the treatment prescribed by your doctor and aren’t a substitute for it. As you can see, they’re mainly for relieving pain and inflammation.

Some herbs, such as mint, oregano, lavender, or chamomile, have an analgesic, antiseptic, and anti-inflammatory effect. The procedure consists of preparing an infusion, soaking a sterile gauze pad with it, and applying it to the baby’s ear.

Similarly, you can apply a few drops of some natural oil such as olive or almond, in order to calm the pain and itching of the child’s middle ear.

A compress soaked in warm water can be applied to the outside of the baby’s ear. If you don’t have sterile gauze, microwave a thermal seed bag for a few seconds. It can promote circulation in the area and alleviate the discomfort caused by the infection. (Make sure it’s not overly hot when you do.)

Read more: What to Do About Heat Rash in Babies: Should I Be Worried?

Vapor inhalation can effectively relieve pain caused by otitis media. Add some eucalyptus or mint leaves to a bowl of boiling water, put a towel over the baby’s head and try to inhale the vapors. Repeat it two or three times a day. It’s very important that you follow these guidelines to prevent burns:

4. Application of infusions with antibacterial effect

In this final tip, you can make an infusion with garlic or onions and apply a few drops in the baby’s ear. Firstly, bring a pot of water to the boil and add an onion or a couple of cloves of garlic. Then, strain the resulting liquid to make sure there are no solid particles left. Allow it to cool down and proceed to apply it.

Finally, we must remind you that these remedies with anti-inflammatory properties are good for soothing pain and discomfort. Also, you must always follow your pediatrician’s instructions in regard to the treatment they prescribe.

How to Prevent a Neonatal Infection
Prevention is the key to preventing a neonatal infection such as sepsis, which can be lethal to a baby. Read more »
Link copied!
Interesting Articles
Babies
Discover Why Babies Stare