The Health Risks of Energy Drinks

They're sold with the promise of giving us new energy and helping us last 24 hours non-stop. They have more and more consumers each year, but also more voices calling for their regulation and warning about the danger of continued consumption. What should we know about them? 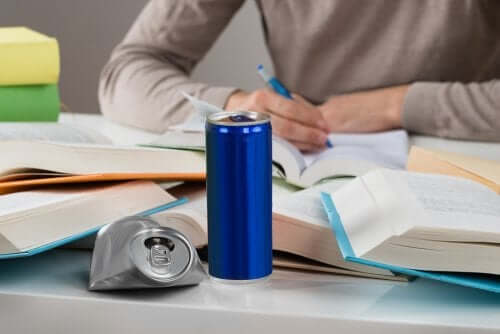 Energy drinks came on the market a few decades ago and their sales are clearly booming. Thanks to advertisements, we believe that they can help us in times of fatigue or increased activity. Are they really harmless, or do energy drinks have health risks?

What are energy drinks?

The scientific community hasn’t agreed upon a definition for energy drinks yet. According to the regulations in force in Spain, for example, they fall into the group of “soft drinks”.

In their particular category, all non-alcoholic beverages containing caffeine, taurine and vitamins (especially of the B group) are grouped together. Sometimes they’re accompanied by other ingredients such as:

The names of these beverages are already one of the first problems they pose. Their name, their advertising and the messages they carry can be misleading.

The EFSA (European Food Safety Agency) itself doesn’t allow them to be advertised as drinks that can enhance physical and intellectual performance. In addition, the European Parliament vetoed the possibility of putting any health claims on such drinks.

It’s important not to confuse this type of beverage with isotonic or sports drinks.

What effects do they have on the body?

Energy drinks have an energizing effect and can increase sports performance. However, drinking them also increases the occurrence of negative side effects.

Although the main manufacturing brands insist on the safety of the product, health experts, such as the World Health Organization, warn that they could be a danger to public health.

Their main warning is that children shouldn’t consume them and that, for some groups of people, they could be potentially dangerous. These groups include the following:

The main risks of energy drinks can be summarized in the following groups:

This is the main conclusion of a study published by the American Heart Association. This study evaluated the impact of a high consumption of energy drinks on the cardiovascular system.

In this same study, consuming energy drinks is related to cardiac arrest and myocardial infarction. They could even be related to blood thickening.

Although this study is the most recent, there’s more scientific evidence on the harmful effects of energy drinks. In all of them, the cardiovascular system, along with the nervous system, is the most at risk.

2. Effects on the nervous system

The adverse effects of caffeine on the nervous system usually appear with doses of 200 milligrams and higher. However, this can vary greatly among different people. To give you an idea, some of these energy drinks contain between 100 and 200 milligrams of caffeine per unit.

What makes it worse is that it’s usually accompanied by other stimulant ingredients that could enhance its effect. Symptoms may include anxiety, restlessness, insomnia, muscle spasms, or periods of restlessness.

One of the main ingredients in almost all energy drinks is sugar. Most of them contain more sugar than regular soft drinks. On average, between 10 and 12 grams per 100 ml of drink.

If we take into account that a can contains 250 ml, we’re talking about 25-30 grams of sugar per can. Some brands even market half-liter cans, which would be equivalent to about 60 grams of sugar. This is well above the maximum amounts recommended by the WHO: no more than 25 grams in children and adolescents.

The most common consumers of this type of beverage are adolescents and adults up to the age of 30. However, data provided by the European Food Safety Agency in 2013 is alarming:

18 % of children between the ages of 3 and 10 years old consumed energy drinks. In addition, 16% of them were chronic consumers which meant they ingested about 4 liters per month.

Children are particularly vulnerable to the risks. They have a smaller body volume and less developed metabolic pathways. They’re therefore more sensitive to caffeine intoxication.

In fact, the EFSA itself assures that it isn’t possible to establish safe amounts of caffeine consumption in young children. In addition, many specialized voices (nutritionists, pediatricians and medical associations) are calling for the regularization of its consumption.

Some governments, such as that of the United Kingdom, are considering banning the sale of energy drinks to children under 16 years of age. There’s a reason for it, since a single can of one of these drinks would be like giving a child three coffees with 12 teaspoons of sugar.

Energy drinks and alcohol: what are the risks?

Energy drinks are usually consumed on their own. However, they’re also often also mixed with alcohol. It’s important to understand that this mixed drink poses other types of health hazards.

In a 2015 study, Marczinski observed higher rates of excessive consumption and risk of alcohol dependence when alcohol was consumed together with energy drinks. In addition, other lab tests show that it increases the desire to drink more alcohol.

Here’s the thing: mixing alcohol and these drinks doesn’t just affect the amount of alcohol consumed. It also increases the likelihood that teens will drive after drinking. They’re also more likely to engage in risky behavior. The lack of motor coordination creates a false confidence that jeopardizes their safety.

In view of these problems with energy drinks, the best recommendation is to have a sufficient and healthy diet to provide the necessary energy and well-being. As always, be cautious when consuming beverages and food that may alter the normal functioning of the body.

Prevent Fatty Liver with 5 Healthy Drinks
Fatty Liver Disease, known medically as Steatohepatitis, is a disease characterised by the build-up of fat in the liver. It's related to the effects of metabolic syndrome, since being overweight and high levels of triglycerides are influential factors. Read more »
Link copied!
Interesting Articles
Nutrition
Nutritional Information and Health Benefits of Peas