The Drug Pregabalin is Used to Treat Epilepsy

Like all medicines on the market, pregabalin can cause side effects. You should, of course, take this into account if you're considering any treatment with this particular drug. Talk to your doctor for more information. 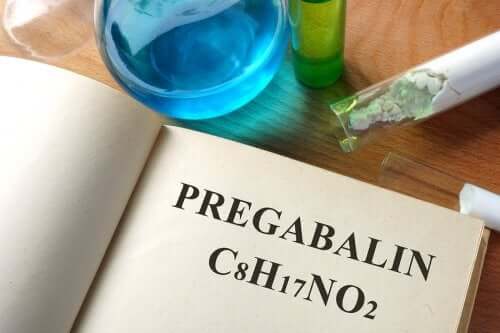 We use the drug pregabalin to treat neuropathic pain and seizures. In fact, when doctors prescribe it as an adjuvant treatment, it reduces the onset of partial-onset seizures.

In this article, we’ll detail the main characteristics of the diseases for which this drug is used. We’ll also investigate the properties of the drug itself.

How does the drug pregabalin work?

Pregabalin is a similar substance to the chief inhibitory neurotransmitter of the central nervous system, GABA.  GABA, like other neurotransmitters, is a chemical substance that we synthesize in our body. It transmits signals from one neuron to the next.

Depending on whether it binds to one receptor or another, this neurotransmitter will trigger some action or another in our body. The activation of the GABA-A receptor, which is the one that predominates in our brain, leads to a reduction in neuronal activity. This would justify the anticonvulsant effect of pregabalin.

However, we don’t yet know exactly how pregabalin works. This is because there’s no indication that it binds with either GABA-A or GABA-B receptors. Neither is the reception of GABA affected.

Also, read  Types of Epilepsy: All You Need to Know

What illnesses are treated with pregabalin?

As we mentioned already, among its other uses, we use pregabalin for the treatment of neuropathic pain. We also use it, in combination with other medicines, to treat epilepsy, particularly in the case of partial-onset seizures.

Pregabalin is one of the most recent antiepileptic drugs introduced to treat partial epilepsy.

In fact, it seems that when we give this drug as an adjuvant treatment, it could play a role in reducing the frequency of epileptic seizures. Research published in 2008 by the journal Neuropsychiatric Disease and Treatment confirms this.

Epilepsy is due to a disorder of the central nervous system. It occurs because our brain activity isn’t functioning normally. The brain then produces electrical charges that generate seizures. These seizures can be fatal if we don’t treat them properly or follow adequate prevention measures.

Symptoms and how they’re triggered vary from person to person. Furthermore, anyone can develop this disease. However, once a person has suffered one type of epilepsy, if it happens to them again it’s more likely to be the same type. This isn’t always the case though and symptoms vary.

However, for a doctor to diagnose epilepsy, the patient must have had at least two unprovoked seizures.

Neuropathic pain affects approximately seven-ten percent of the European population. Patients describe the pain as a stabbing and burning sensation. They sometimes also feel a kind of tingling and throbbing in different parts of their body.

This pain occurs because the nervous system’s not working properly. In fact, it’s abnormally interpreting stimuli. This means it triggers pain from stimuli that shouldn’t cause pain at all.

The disease usually lengthens over time and appears intermittently. Although it might occur spontaneously, some situations might provoke it. This could be surgery, infection, or suffering from some form of trauma.

Side effects of the drug pregabalin

Like all medicines on the market, pregabalin might produce side-effects. These should always be considered before taking this drug.

We understand side-effects as all those undesirable and unintended effects that we expect to see with any drug treatment.  The most common side-effects in clinical trials with this particular drug were:

Pregabalin: A drug still being studied

We use pregabalin mainly to treat neuropathic pain and epilepsy. It’s a substance similar to GABA, an inhibitory neurotransmitter of the central nervous system.

However, we still don’t know how this drug actually works. This is because it doesn’t react with the receptors of the GABA neurotransmitter.

We recommend you thoroughly research this drug with the help of your doctor if you’re considering taking it. You should also investigate its possible side-effects. Furthermore, as with any medication, you should only take it following your doctor’s instructions.

Epileptic Seizure: What it Is and How to Respond
In our society, witnessing an epileptic seizure is somewhat traumatic for many. Read this article to learn more about them! Read more »
Link copied!
Interesting Articles
Medication
Trastuzumab: Therapy Against HER2 Positive Breast Cancer