The Complications of Roseola and How to Prevent It

Roseola is a contagious disease that causes a high fever and a rash that develops as the fever subsides. In this article, discover the complications of roseola and how to prevent it. 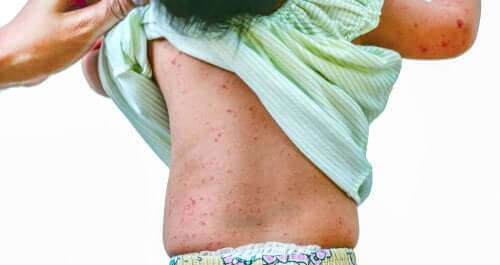 Roseola is a viral disease that mostly affects young children between the ages of six months and two years. It’s a contagious disease that causes a high fever and a rash that develops as the fever disappears. It’s also known as sixth disease or roseola infantum. In this article, you’ll discover all about this condition, as well as the complications of roseola.

Signs and symptoms of roseola

Here are some of the symptoms it can cause:

Roseola fever lasts three to seven days. After the fever subsides, a rash that lasts from several hours to several days appears. Roseola usually begins with a sudden high fever, often over 103°F.

During or before the fever, some children may also suffer a sore throat, runny nose, or cough. In addition to fever, your child may also have swollen lymph nodes in the neck. The fever lasts three to five days.

This article may also interest you: The Relationship Between Body Temperature and Fever

In most cases, a rash appears once the fever goes away. The rash consists of small pink spots or bumps. Although these spots are generally flat, some can be raised.

Typically, the rash appears on the chest, back, and abdomen and then spreads to the neck and arms. Sometimes it may even reach the legs and face.

The rash, which isn’t itchy or uncomfortable, can last from several hours to several days before disappearing. Other signs and symptoms may include:

Can roseola be prevented?

Roseola is contagious. The infection spreads when a child with roseola talks, sneezes, or coughs, expelling infected droplets into the air that other people can breathe in.

Droplets can also end up on surrounding surfaces. Thus, if other people touch those surfaces and then touch their mouth or nose, they can become infected.

This disease can spread during the high fever phase. However, it can’t spread when the rash breaks out. There’s no way to prevent roseola.

But since it affects young children much more than adults, experts believe that a childhood episode of roseola can give some long-lasting immunity to this disease. Although people could contract it several times, this isn’t common.

To make the diagnosis, the doctor will explore the patient’s medical history. A diagnosis of this condition isn’t usually clear until the fever disappears and the rash appears. At that time, the doctor may ask for tests to make sure the fever isn’t due to another type of infection.

Most treatments focus on reducing a high fever. Antibiotics don’t work, as a virus, not a bacterium, causes this disease.

Read on to learn more: Symptoms, Causes and Treatment of Skin Rash

The complications of roseola

Some of the complications of roseola that may appear are:

Sometimes, a child with roseola has a seizure a rapid rise in body temperature causes. If this happens, the child may lose consciousness and their body may shake. They may also temporarily lose bladder or bowel control.

Febrile seizures in healthy young children are usually transient and occasionally harmful. The complications of roseola are rare. Most healthy children and adults with roseola recover quickly and completely.

People with weakened immune systems can catch roseola again or develop a previous infection. Because they’re less resistant to viruses in general, they tend to develop more severe cases and it’s more difficult to fight the disease.

How to Treat a Fever
It’s very important to treat a fever to avoid possible complications. You can try some home measures first then see a doctor if they don't work. Read more »
Link copied!
Interesting Articles
Illnesses
Open-Angle Glaucoma: What Does it Consist Of?