The Symptoms and Treatment of Cervical Erosion

Cervical erosion is caused by contracting chronic infections, unusual pH balance, an increase in estrogen levels, and traumas, among other things. Learn more about it in this article. 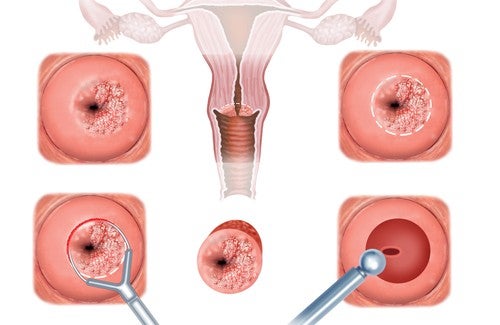 Cervical erosion, or erosion of the cervix, is an inflammation of cervical cells. This occurs when squamous cells in the opening of the urinary tract turn into columnar cells.

Overall, cervical erosion produces irritation, redness, and inflammation. In addition, it is sometimes very similar to temporary cervical cancer. An increase in discharge, infertility cases, back pain, and bleeding are a few other symptoms that come from the inflammation.

This is why it’s advisable to know the treatments in order to avoid issues.

Any woman can suffer from cervical erosion, although it’s more common in women during their fertile years.

It may have different causes, but it often comes from infections, carcinoma or some other trauma, such as multiple births. It is also caused by chronic and acute infections.

This inflammation could even affect young women if they are using contraceptive pills.  In addition, using intrauterine devices for prolonged periods of time and tampons are also common causes.  However, this erosion could appear even without use of these.

Unfortunately, women of a low socioeconomic status who have multiple pregnancies, marry early, or have poor hygiene have a higher percentage of suffering from it.

No matter what, controlling these types of infections is recommended. This is because cervical erosion could cause cervical cancer.

How to Fight Cervical Cancer

The Symptoms of Cervical Erosion

Finding out about cervical erosion in a patient is very common during a gynecological visit.  However, a lot of women show no symptoms. Even if a pap smear comes back normal, you could still present signs of inflammation and abnormal cells.

Despite this, there are several symptoms that are common. These include difficulty urinating, pain or bleeding after intercourse, vaginal discharge or leucorrhoea.

Cervical erosion causes infections. These are more frequent in the epithelium, since it creates ideal conditions for internal organisms to grow in it. That’s why the cervix begins to look red and granulated.

Sometimes, no specific treatment is recommended, especially for women who are not symptomatic.

However, some people suffer from pain, complications, and specific symptoms like vaginal discharge or leucorrhoea, bleeding after intercourse and problems with urine flow. In this case, undergoing specific treatment is a good idea to prevent possible infections and other complications. A few treatments include taking certain medications, cervical cauterization or laser cauterization.

On the other hand, women who have this infection and still are not sexually active should research and take control of their health. No matter what, any irregular result on a pap smear must be treated to prevent the risk of contracting cervical cancer or other infections.

8 Key Symptoms of Cervical Cancer
%%excerpt%% Regular medical check-ups are critical to the successful treatment of this disease, especially if you have a family history or symptoms of cervical cancer. Read more »
Link copied!
Interesting Articles
Illnesses
The Connection Between Erectile Dysfunction and Diabetes