Do We Really Inherit Intelligence From Our Mother?

It's common to think that intelligence is directly related to genetics; thus we inherit it. Should we continue to think so? Is mom truly responsible for how smart we are? 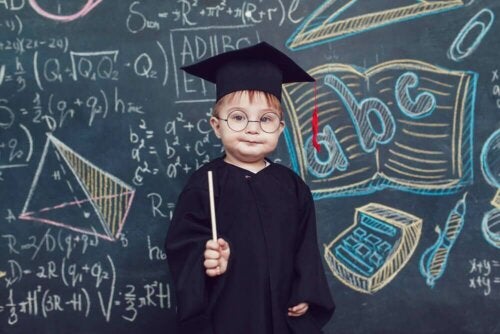 You might have wondered whether you inherit intelligence from your mother or father since people tend to associate this ability with genetics. For this reason, several teams of researchers have decided to investigate the matter.

Some years ago, people thought that intelligence came from the mother, given the bond people have with her from the first moment of life. Also because scientists thought cognitive abilities were on the X chromosome. The mother’s X chromosomes provide more information for the development of thought-associated brain structures.

Experts at the Genetic Literacy Project have decided to make several clarifications regarding these ideas. Let’s look at them below.

What experts say about how you inherit intelligence

In his book Sex Linkage of Intelligence, American scientist Roberth Lehrke suggests that a chunk of the cognitive component of a human being is directly linked to the X chromosome. Also, he proved that women are twice as likely to inherit cognitive traits because they have two X chromosomes.

However, the Genetic Literacy Project makes it clear that the mother plays a key role in the development of intelligence, not just because she contributes X chromosomes, but also because of the type of bond she can develop with her child on many levels: physical, emotional, psychological, etc.

Did you really inherit intelligence from your parents?

You’re reading this article to know whether intelligence comes from the mother since studies show that about 45% to 55% of intelligence is hereditary. That means that a large chunk of intelligence develops if there are appropriate personal and family conditions.

Find out How to Keep Your Mind Fit and Sharp

Other factors that influence intelligence

Perseverance, effort, discipline, commitment, and interest in learning are factors that influence a child’s intelligence as time goes on.

A child’s independence is essential as it helps the cognitive process run smoothly. The child needs to define and determine the things they want without being forced to make decisions under pressure.

A child who’s confident in their skills can solve any problem that arises in their life, thus developing analytical skills in any situation.

Children who are more attached to their parents tend to overcome frustrations in their lives more easily. In this case, there are studies that also favor the mother and her maternal love.

The media says a lot about whether intelligence comes from the mother or not. However, many times they misrepresent or don’t present the interpretation of the data clearly in the different investigations, given the lack of knowledge that exists about genetics in general.

So, keep in mind:

Read about The Genetic Origin of Sex: the X and Y Sex Chromosomes

Final thoughts on how you inherit intelligence

Now that you know that intelligence comes partly from the mother, do intellectual exercises with your child so that you both improve your skills.