Purslane is a plant with nutrients that promote well-being. Have you heard about its health properties? Today we'll share the most important ones to convince you to add it into your diet. 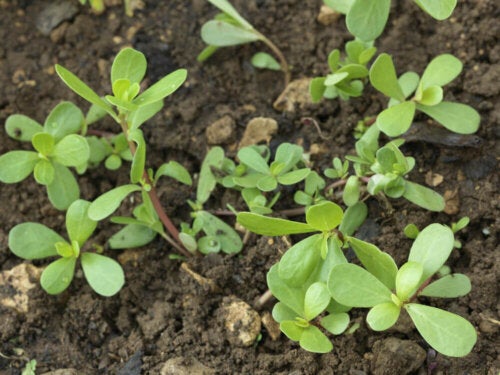 Purslane is scientifically known as Portulaca oleracea. Many think of it as a weed, but it’s also classified as an edible green with good nutritional quality.

People used it in Ancient Greece and in Chinese medicine due to its nutritional properties. Learn more about this plant in this article!

Until recently, purslane was popularly known as a weed that’d grow anywhere. Purslane may even appear in a crack on the sidewalk. Farmers don’t like to see it appear among their crops, as it can harm them.

However, this plant with yellow or pink flowers stands out for its great resistance and excellent nutritional values. Nowadays, people finally recognize it as a cheap and accessible super food they can eat like any other vegetable which helps with many health conditions.

As far as nutritional properties are concerned, you can find that purslane contains natural components and beneficial properties. According to a publication in BioMed Research International, it is a source of:

Furthermore, according to the same publication, it also has pharmacological properties such as neuroprotective, antimicrobial, antidiabetic, antioxidant, anti-inflammatory, and antiulcerogenic activities.

Read about The Consequences of Calcium Deficiency

It’s very important to note that purslane has shown positive health-enhancing effects. However, it isn’t a superfood or food with miraculous properties. In fact, there are no “super” foods for your health.

Simply put, they are nutritious ingredients that can supplement your diet to help promote wellness. With this in mind, let’s take a look at the main properties of this vegetable.

Recent research published in the Journal of Pharmacopuncture reviews the anti-inflammatory effects of purslane. According to this publication, the plant contains several substances with these properties. Among these are substances called Oleracone and Oleracimin, which are two isolated alkaloids.

Some aqueous extracts and ethanolic extracts of the plant have also been identified with this effect. Among other things, this effect is also attributed to its omega-3 and mineral content.

Antioxidants help fight free radicals and prevent aging. Few plants are as rich in antioxidants as purslane. According to a publication in the Journal of the American College of Nutrition, its antioxidants include:

Omega 3 fatty acids aren’t produced in the body. However, their proper assimilation contributes to the proper functioning of various body systems. In fact, scientists have suggested they contribute to the prevention of cardiovascular and anti-inflammatory diseases.

According to research published in The Scientific World Journal, purslane is a plant that provides significant amounts of omega-3. Specifically, it contains two types of omega-3 fatty acids, ALA and EPA. However, it is exceptionally high in ALA.

In addition to the beneficial effects of omega-3 in purslane, there are other reasons why it contributes to your heart health. A study published in the International Journal of Research in Medical Sciences indicates that its content of polyphenols and antioxidant substances may contribute to the prevention of problems such as atherosclerosis.

Meanwhile, research reported in the Avicenna Journal of Phytomedicine concluded that extracts of this plant have a protective effect on cardiac dysfunction.

5. It has anti-ulcer properties

Purslane mucilages also help protect organ walls. Furthermore, according to information published in the American Journal of Translational Research, the ethanol extract of the plant has shown beneficial effects against inflammation and ulcerative colitis.

Purslane helps to naturally reduce blood sugar levels. This means that it can prevent illnesses such as diabetes, obesity, or insulin resistance.

Research published in BMC Complementary and Alternative Medicine found that purslane extracts improve glucose metabolism and maybe a new therapeutic strategy for the prevention of diabetes.

Read about Diabetes in Children and Adolescents

The antimicrobial properties of this plant have been the focus of studies. Furthermore, in a study published in the International Journal of Infection, it was determined that extracts obtained from the leaves and seeds of purslane have a remarkable antimicrobial effect.

Although more studies are needed, scientists believe it could be useful against some drug-resistant bacteria.

8. It has neuroprotective effects

There need to be more studies. However, there’s evidence of neuroprotective effects provided by purslane. For example, a study reported in CNS & Neurological Disorders-Drug Targets found neuroprotective and antioxidant benefits with the administration of the herbal aqueous juice of purslane.

9. Purslane is good for your skin

Due to its nutritional quality, purslane also benefits your skin. In fact, it has healing, anti-aging, and regenerative properties, since it provides antioxidants, fatty acids, and vitamins.

Specifically, a review published in the International Journal of Science and Research determined that this plant has potential benefits in skincare. This is because it helps heal wounds, brightens the complexion, and even prevents future signs of aging.

Due to its concentration of antioxidant compounds, purslane can combat oxidative stress. Furthermore, the latter is responsible for cellular deterioration and the appearance of some of the most frequent chronic diseases.

Research published in the Journal of Medicinal Plants Research shows that the aqueous juice of purslane is a promising natural product that could contribute to the prevention of diseases related to oxidative stress.

Despite the many benefits of this plant, researchers haven’t yet accepted its consumption as a treatment against diseases. However, you can include it in your regular diet as a supplement. Furthermore, you should avoid it if you have a tendency to have kidney stones, as it’s a plant with oxalates.