Prickly Heat: What Is It?

In addition to rashes and inflammation, prickly heat often produces small blisters that can be painful. Keep reading to learn more. 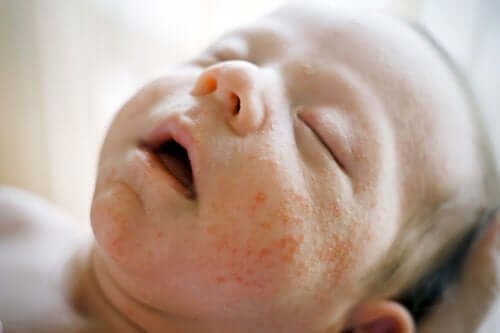 Prickly heat, also called miliaria rubra, is a type of rash that appears on the skin. It’s a condition that frequently affects newborn children. However, it can happen at any age.

This rash occurs because the sweat gland ducts become blocked. They’re responsible for transporting sweat to the most superficial part of the skin. Then, clogging, itching, inflammation, and small blisters appear.

All of these symptoms are very annoying and unpleasant. Usually, it happens in the summer, especially in hot and humid places. Additionally, it’s a condition that tends to go away on its own.

However, due to its frequency and how nervous parents and babies can get, we’ll explain everything you need to know about prickly heat.

What is prickly heat?

As we mentioned, it’s a specific rash that happens when the sweat glands are blocked. These are the ones that allow sweat to reach the most superficial part of the skin, where perspiration takes place.

When they get clogged, the sweat stays under the skin instead of evaporating. Then, this causes an inflammatory reaction, which leads to the rash, itching, and the rest of the symptoms.

However, researchers don’t know what causes this exactly. Some think that one of the reasons could be that these ducts didn’t develop sufficiently. Therefore, they tend to break and don’t work properly.

This would explain why newborns suffer more often from prickly heat. Also, another related situation is living in hot and humid places. Likewise, any physical activity that involves sweating a lot seems to play a role.

On the other hand, prickly heat also frequently affects people who have been ill and at rest for a while. In fact, this especially happens to people who have had a fever.

You might be interested in: What to Do About Heat Rash in Babies: Should I Be Worried?

Also, prickly heat comes with itching and irritation. It can occur at different levels of the skin, and with greater or lesser severity. In other words, the symptoms may be different from person to person.

In milder cases, it only affects the outer layer. Therefore, in addition to the rash, there are small blisters that pop easily. These blisters can be painful.

On the other hand, when it affects deeper layers, more painful red bumps appear. Interestingly, these cases come with a tingling sensation. Sometimes, these lumps fill with pus and become inflamed, complicating the condition.

Prickly heat can become more serious, although it doesn’t occur as often. When it is, it affects deeper layers of the skin. It also produces firm, red lesions on the skin.

What is the treatment?

In most cases, prickly heat doesn’t need treatment. However, there are certain measures that can help reduce symptoms and facilitate their improvement. For example, it’s important to stay in a cool, well-ventilated place.

In addition, the goal is to avoid very tight clothing or excess clothing. If it’s summer, try to dress in light and fresh clothes. If it’s your baby, do the same, and try to protect him from the heat.

When dealing with severe cases of prickly heat, you might need to apply certain ointments or creams to relieve symptoms. In some situations, you might be prescribed topical steroids to relieve inflammation.

Prickly heat is a skin rash that usually affects babies in hot, humid climates. Complications aren’t common or serious. However, it’s essential to go to the doctor if you have any symptoms to rule out any other condition.

Types of Skin Rash and Their Causes
There are many types of skin rash. These are also known as "efflorescence," which is basically a term for any cutaneous lesion in the body. Read more »
Link copied!
Interesting Articles
Illnesses
What Is Cyberchondria and How Do You Deal with It?