How to Prevent Heel Spurs

To avoid the appearance of plantar fasciitis, it is essential to avoid obesity as well as bad postures and the use of inadequate footwear. 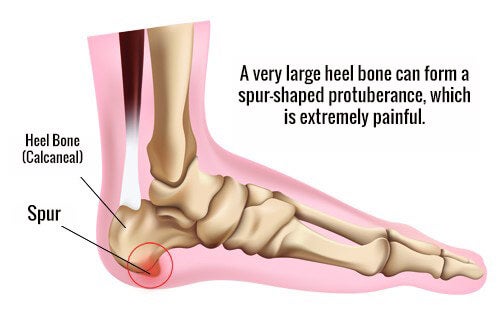 Heel spurs are caused by a calcification of the conjuncture between the tendons and the calcaneus bone of the foot. It makes normal heel support difficult, creating aches and pains associated with inflammation.

There are two types of heel spurs: posterior inferior spurs (underneath the heel), which are the most common, and posterior superior spurs (where the Achilles tendon attaches).

This condition is caused by excessive stretching of the plantar fascia (a band of thick tissues that cover the bones at the base of the foot), causing inflammation known as plantar fasciitis.

The body accumulates calcium in injured areas with the intent of healing tissues. As a result, this bony prominence grows progressively.

This situation can be caused by obesity, poor posture, excessive athletic strain, use of improper footwear, overloading the tendon, and standing for long periods of time.

Congenital spurs can appear as well. They irritate tendons and cause inflammation.

Read on: The Best Natural Remedies for Inflammation

Plantar fascia inflammation has been related to the development of the spur, but you can also have fasciitis without the spurs. Plantar fasciitis causes an intense pain in the sole of the foot that radiates toward the heel.

How are spurs diagnosed?

Spurs can show up on X-rays, which will show a protuberance pointing towards the toes, measuring between one and five millimeters. Some people can have this condition and show no symptoms.

First, let’s talk about the inflammatory pain caused by overloading the tendons. People can feel pain in the morning after taking their first steps. They can feel like they’re stepping on a nail. The pain generally subsides with rest, but returns once again when the foot is used for support. Also, carrying heavy objects can worsen the symptoms.

This article may interest you: 9 Pressure Points that Will Help You Relieve Pain

How to prevent heel spurs

Obviously, the best way to prevent heel spurs is to avoid their causes, such as obesity, excessive efforts, bad positions, improper footwear, among others.

You can also prevent heel spurs with your diet by consuming foods that contain magnesium, silicon, and zinc since they help keep our muscles and tendons healthy:

Pineapple and papaya are two fruits that can help due to their high bromelain contents. Bromelain has anti-inflammatory properties. You should eat them together to boost their effects.

In conclusion, a healthy and balanced diet will help us prevent heel spurs and other conditions and diseases.