Nux Vomica: What You Need to Know

Nux vomica has been used to treat stomach problems, hangovers and menstrual cramps. Find out if there's scientific evidence to support these benefits. 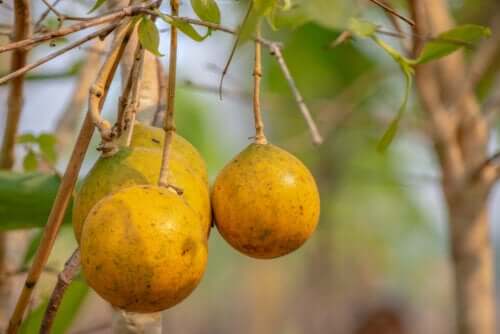 The strychnine tree, or Strychnos nux-vomica, is a medium-sized evergreen tree native to China, Thailand, East India, and Australia. Its seed, also known as nux vomica, poison nut, semen strychnos, and quaker buttons, is used as a natural remedy to treat various disorders and symptoms.

Erectile dysfunction, constipation, migraine, stomach bloating, and anxiety are some of the health problems for which some people traditionally use nux vomica. However, there’s currently no scientific evidence to support these uses.

Poison nut is the name it receives when the seed is raw. This is because it contains an alkaloid called strychnine, which, in some cases, is used as a rat poison. It can be dangerous because of this, but it also exists on the market in pill or powder form.

The benefits of nux vomica

According to the testimonies of some people, the nux vomica has anti-inflammatory properties. Therefore, they believe they can use it to treat asthma, rheumatism, and hemorrhoids. According to an animal study by the American-Eurasian Journal of Sustainable Agriculture, it may be effective in treating inflammation.

These seeds also contain antioxidants, so they may have the potential to fight free radicals that damage the body’s cells. In addition, many claim they have antiseptic properties. However, more research is necessary.

According to research conducted on mice by Phytotherapy Research, the alkaloids in walnuts may inhibit the growth of some cancer cells, such as colon cancer cells. However, further studies on the subject are still necessary and we can’t consider it a first-choice oncological approach.

At the same time, research in the Journal of Ethnopharmacology suggested that these seeds may have the potential to stop the growth of human liver cancer cells. However, it’s important to note that more scientific studies are necessary to support this theory.

Many people use nux vomica to treat different conditions. These include back pain, constipation, menstrual cramps, impotence, and male infertility. It also has anecdotal use in migraine, anxiety, and insomnia.

However, there’s a lack of scientific evidence to support such benefits. So, you should talk to a physician before ingesting it.

Finally, a study with rats that appeared in the Journal of Alternative and Complementary Medicine suggested that nux vomica could help in the treatment of alcohol use disorders. Although there’s been no testing of the effects on human alcoholic patients at this time.

Read also: Learn All about the Different Types of Insomnia

How is nux vomica used?

Nutmeg supplements are available over-the-counter and you can purchase them at health food stores in pill or powder form. Each manufacturer has varying dosages and instructions, as they lack scientific endorsement and don’t have an exact amount.

For this reason, it’s important to consult a doctor before taking them. Don’t rely on the product label. At the same time, if you’re lactose intolerant, you should check if it was made with dairy products. Some formulas contain them, while others don’t.

According to some manufacturers, this product has an expiration date of up to 3 years if you store it in a cool, dark place.

Possible risks of its consumption

Nux vomica is considered an unsafe seed for human consumption. It’s believed that ingesting 30 milligrams or more of this product may cause serious side effects including the following:

The National Institute for Occupational Safety and Health (NIOSH) classifies vomica nut as dangerous, due to its serious neurological side effects. Therefore, you should never use products containing this seed without first consulting a physician, especially when it comes to treating erectile dysfunction.

Who should avoid it?

Although nux vomica isn’t recommended for anyone, there’s a higher risk of increased toxic side effects in certain people. Therefore, those in the following categories should categorically avoid its consumption:

What to remember about nux vomica?

Nux vomica is native to Australia, Thailand, China, and East India. Traditionally, people have used it to treat various conditions, such as erectile dysfunction, anxiety, constipation, menstrual cramps, and migraines.

However, there are currently not enough scientific studies to support these benefits. On the contrary, the ingestion of this seed in high doses could generate serious side effects.

Keep in mind that each manufacturer handles different doses and instructions. So be very careful not to fall for the indications on the product label. These don’t have any sort of health certificate.

Everyone should avoid its consumption, but especially pregnant women, nursing mothers, children, and people suffering from liver diseases. Before ingesting nux vomica, consult a doctor.