What Are Non-hormonal Birth Control Methods?

Non-hormonal birth control methods act as a barrier. Some of them, such as the IUD, are very effective: its effectiveness is 99 percent. 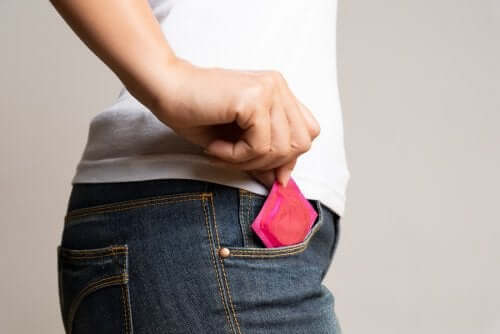 Non-hormonal birth control methods are those that prevent the fertilization of the egg by the sperm without this intervening in the female menstrual cycle. Generally, this type of method acts as a barrier. Their function is to prevent contact between an egg and a sperm.

Other types of non-hormonal contraceptives are planning methods. These tell us when to avoid sex according to the phase of the menstrual cycle you’re in.

Although they can be very effective, non-hormonal contraceptives also have some disadvantages. Here’s a detailed explanation of this topic.

As highlighted in a publication by the American Association of Reproductive Health Professionals, there are a wide variety of non-hormonal contraceptives that offer both advantages and disadvantages to their use. Some are more effective than others and not all offer protection against STDs.

The male condom is a latex sheath that prevents the passage of sperm inside the uterus. According to the Association of Reproductive Health Professionals, with this method, the risk of unwanted pregnancy is 18%. Its main advantage, besides its contraceptive effectiveness, is that it protects against sexually transmitted diseases.

The disadvantages of male condoms have to do with their use. Unlike other methods that act permanently, men must put on a new condom every time they initiate a sexual encounter and replace it as many times as necessary.

The diaphragm is a latex circle that a woman places inside the vagina before intercourse. Its main advantage is that the woman herself is in control of its placement, and it also covers the cervix completely.

This disadvantage is that it doesn’t protect against sexually transmitted diseases. Also, it must be left in place for hours after the act. According to the researchers, this method has a 12% chance of failing as a contraceptive.

You may also be interested in: Contraceptive Methods: Know the Myths and Truths About Them

Like the male condom, it consists of a latex bag that prevents the passage of sperm to the eggs. It also protects against sexually transmitted diseases. The main disadvantage lies in how complicated female condoms are to put on.

This is a more invasive and permanent method, with a duration of 10 to 20 years. It consists of an object made of plastic and copper, which a professional inserts in the woman’s cervix.

Its function of this birth control method is to create a hostile environment for the sperm so that they don’t reach the egg. They also release copper particles that prevent the adherence of a fertilized egg.

Among its advantages are that you can get one and forget about it for quite a long time. What’s more, it’s more than 99% effective. However, one disadvantage is that it doesn’t prevent sexually transmitted diseases.

Sterilization is a surgical process, which works as a contraceptive method without hormones. In men, it’s known as vasectomy, which is permanent and prevents the passage of sperm into the semen.

Its main advantage is effectiveness. At the same time, it doesn’t prevent ejaculation, nor does it affect virility. On the other hand, female sterilization is a process that involves isolating the ovaries from the uterus. Therefore, the eggs can’t reach the uterus.

This is a synthetic sponge that’s impregnated with spermicide. It blocks the cervix, absorbs the semen, and fights the sperm. One of its advantages is its effectiveness, as long as women use it correctly.

More specifically, its effectiveness is approximately 88% in women who’ve never given birth and 76% in those who have. Also, women can insert it on their own.

However, among its disadvantages is that, in women who’ve already given birth, the effectiveness can decrease up to 68%. Also, inserting it correctly can be complicated and it doesn’t protect against sexually transmitted diseases. What’s more, it must remain in place for at least 6 hours after sex.

This method isn’t only hormone-free but also doesn’t require the use of any special products or surgical intervention. Natural planning consists of programming sexual activity depending on the stage of the menstrual cycle.

The goal is to avoid having sex on fertile days. It’s a method that can be effective when the cycle is regular. However, there are many risks of imprecision that depend on nature.

Non-hormonal contraceptives offer several advantages over hormonal ones. However, they’re not always as effective. You must consult a doctor, gynecologist, or sexual and reproductive health professional to determine the method of contraception that’s best for you.

What You Should Know About the Birth Control Shot
A birth control shot is a very effective method for preventing pregnancy. Its effectiveness rate is 99% -- but only when applied in a timely manner. Today, we'd like to tell you more about it. Read more »
Link copied!
Interesting Articles
Health and sexuality
5 Types of Sexual Orientation