Meningeal syndrome is a group of symptoms that appear when the meninges of the human body are affected. The causes can be varied and dangerous. In this article, we'll see the signs and how to detect them. 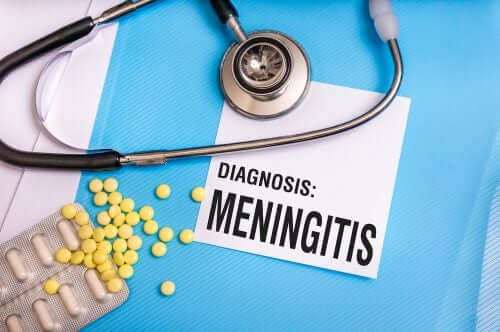 Meningeal syndrome isn’t a disease in itself, but a combination of symptoms that indicate the existence of some pathological process in the meninges. The causes can be varied, but, as a general rule, we must say that they always require immediate action.

In medicine, specialists speak of a “syndrome” when a group of signs and symptoms appear together, and when these symptoms could be due to various etiologies. This means that a syndrome can have different diseases as their origin.

In the meningeal syndrome, these three phenomena constitute the set of basic symptoms:

The symptoms are evident in a patient when the meninges are already inflamed. The meninges are three very fine, thin layers that cover the inside of the skull and the spine –  the structures of the central nervous system. They wrap around the brain and spinal cord as if they were made of paper.

There are three meninges and they’re called dura mater, pia mater and arachnoid. Meningeal syndrome refers to the inflammation of the last two, which the anatomy describes as “leptomeninges”. When these layers become inflamed, they irritate the central nervous system.

Although there are several causes of meningeal syndrome, the most important are divided into two groups: inflammatory and non-inflammatory. This general division doesn’t determine the severity of the clinical picture, as we’ll explain below.

Within the inflammatory causes we can name:

The other group of causes are non-inflammatory. Among them:

You may want to read: First Aid for Strokes

How to recognize meningeal syndrome

As patients don’t always have a fever with meningeal syndrome, there are two symptoms that are considered key: headache and muscle contractures.

The headaches in these cases are pains that tend to be intense and persistent. The patient often feels the need to yell and shout because of the pain they feel in their skull. The predominant location is the frontal and the occipital one, that’s to say, near the forehead or near the nape of the neck.

This headache usually gets worse and intensifies before stimuli like light or noises. When it intensifies with light, it’s called photophobia, and the patient often has to close their eyes. However, when the pain is worse with sounds, then it’s called algoacusia.

When this stiffness is in the back, then they won’t be able to move their knees to their chest. These have been historical and classic signs that medicine has been associating with meningitis for decades.

If you, or anyone you know, has these symptoms, then visit your doctor right away. The professional will request the necessary studies, usually blood tests and images of the nervous system. They may also resort to a lumbar puncture to study the cerebrospinal fluid if they consider it necessary. Patients and doctors should take these symptoms very seriously as the patient could be very much at risk.

All About Mumps and Why it’s Important to Vaccinate Against Them
The best way to prevent mumps is undoubtedly the MMR vaccine. In this very interesting article, learn all about mumps and how to prevent them. Read more »
Link copied!
Interesting Articles
Illnesses
What Is Ischemic Heart Disease?