A magnesium deficiency is the presence of low magnesium levels in the blood. In this article, we'll explain what the causes are and how it's treated. 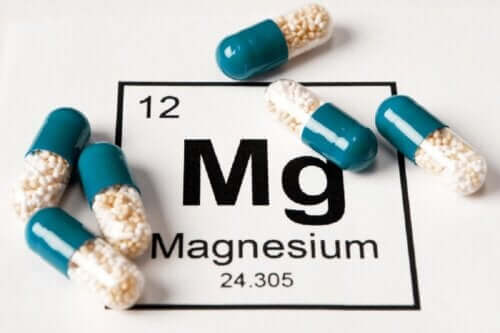 If you want to know why low magnesium levels occur and what the symptoms are, we invite you to continue reading!

Magnesium in the body

As for the tissues where it’s present, we find most of the magnesium in our bones. Then, we find about 20% in the muscles, and the rest is distributed in other organs.

Diet and the elimination of urine regulate the amount of magnesium in the body. Thus, in a normal and varied diet, there are 360 milligrams of magnesium, which is enough to support the normal functioning of the body.

The foods that provide the most magnesium to the human body are cereals, nuts, and legumes. There is also magnesium in green leafy vegetables and seafood, such as shellfish.

Read on: Nutrition and Kidney Failure: Everything You Need to Know

In most cases, hypomagnesemia doesn’t produce symptoms on its own. The signs that become evident are the result of other associated substances. Therefore, the main symptom producer is the lack of potassium that low magnesium levels bring.

Keep on discovering: 6 Foods that Contain More Potassium than Bananas

Once the body is deficient in magnesium and potassium, likely, calcium will also decrease. Hypocalcemia then adds to the symptoms as well.

This is how specialist James L. Lewis details the following clinical picture:

The treatment of low magnesium levels

If the hypomagnesemia isn’t severe and only shows up in a routine test, the treatment is simple. In this case, doctors recommend a diet with foods containing magnesium, to begin with. Then, they will discover the underlying cause of the disorder.

If there’s no improvement in blood magnesium values despite diet changes, a doctor will prescribe supplements. Oral supplements are always preferable.

Likewise, the parenteral route of the application of magnesium is for severe cases (with symptoms that affect the quality of life). However, it’s also chosen by patients who can’t use the oral route, e.g. because of digestive surgery. Also, chronic alcoholics with hypomagnesemia often prefer this route.

If hypomagnesemia is accompanied by low potassium or low blood calcium, these should also be treated. This was demonstrated by a study published by the Journal of Clinical Rheumatology in 2008.

In fact, ideally, all substances should be supplemented because if only one value is improved (e.g. potassium) without correcting the others, the effect isn’t long-lasting.

If you have low magnesium levels in your blood, your health care professional will advise you on a suitable diet and treatment. By simply complying with these measures, the disorder should disappear.

Also, remember to maintain a healthy lifestyle and watch out for any symptoms to prevent these kinds of problems in time.

Magnesium, a Complete Mineral
As you continue, discover everything you should know about magnesium so that you can take advantage of this complete mineral. Read more »
Link copied!
Interesting Articles
Medication
Varenicline, an Effective Drug to Quit Smoking