Lyme disease is an infection that, at first, only causes erythema on the skin. However, if left untreated, it can lead to severe complications. In this article, discover Lyme disease treatment. 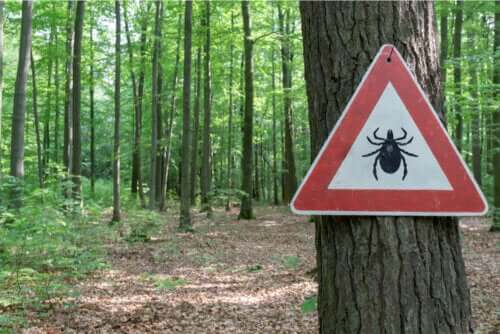 Lyme disease treatment is something quite recent, as this pathology was first recognized in 1975. It’s an infection caused by a bacterium of the Borrelia family, which is transmitted through tick bites.

Therefore, to catch this disease, you need to have contact with these arthropods. This disease is more common in the countryside, where there are vast fields, forests, or herbs. However, this doesn’t mean that all ticks transmit Lyme disease.

This disease causes severe neurological complications if it isn’t treated early. In addition, the drugs vary according to the age and severity of the condition. In this article, we’ll explain everything you need to know about Lyme disease treatment.

Before we start talking about Lyme disease treatment, you need to know more about this condition. As we already mentioned, it’s an infection transmitted by the bite of certain ticks.

After the bite, a small bump appears in the area, which goes away in a few days. Later, a rash appears on the skin, which spreads progressively. This rash doesn’t itch or hurt but does change location (doctors call it “erythema migrans”).

Also, many people experience general malaise, fever, and headache. The problem is that complications appear even years after these symptoms disappear.

For example, it’s common for patients to experience joint pain, especially in the knees. Similarly, they can progress to meningitis, paralysis on one side of the face, or limb weakness. In some cases, they suffer heart rate alterations or memory impairment.

This article may interest you: Lyme Disease Symptoms You Need to Know

Lyme disease treatment must be started early, since it’s the best way to avoid all the complications that we mentioned above. As it’s a bacterial infection, medical professionals indicate antibiotics.

Both the type of treatment that’s chosen, as well as the result obtained with it, depend on the severity of the infection and when it was detected. A review article of the Colombian Medicine Act explains this, and also affirms that, when the disease is advanced, the result isn’t usually as satisfactory as in mild cases.

When the infection is found early, the patient can be oral. The most widely-used antibiotics are tetracyclines, usually doxycycline. The dose medical professionals prescribe is 200 milligrams per day, for between 21 and 30 full days.

However, according to a study published in the Family Medicine journal , doxycycline can’t be used in special situations. For example, in children and pregnant women. In the case of children under the age of nine, experts recommend using another type of antibiotic, such as penicillin.

On the other hand, in pregnant women or those who are breastfeeding, it’s best to use amoxicillin or cefuroxime. The latest publications suggest that the treatment of Lyme disease in less than 21 days is also effective.

Treatment in late stages or in more severe cases

When the diagnosis is late and the disease is advanced, medical professionals opt for other drugs. The most commonly used in these cases is doxycycline. The difference is that the treatment must be intravenous and for a longer time, since the infection has settled in the tissues and replicated.

The same goes when complications appear, especially in the central nervous system. For example, as we pointed out above, it may lead to facial paralysis or meningitis. In this situation, medical professionals opt for intravenous antibiotics.

The most commonly used drugs for these complications are cephalosporins. Even though the prognosis is good, the patient must receive treatment as fast as possible. But even patients who are treated early can suffer from the symptoms for some time.

In short, patients should start Lyme disease treatment early, as there’s a high risk of neurological or joint complications. The drugs medical professionals prescribe for it are antibiotics.

When they detect the infection early and the manifestations are mild, they usually prescribe oral doxycycline. However, in children and pregnant women, it’s best to opt for penicillin, such as amoxicillin. Drugs must be administered intravenously for late stages of the disease.

The main thing is prevention. You should avoid environments with ticks, eliminate them from your house, and take precautions in summer picnic spots or camping areas. Simple measures reduce the risk of becoming infected.