Is Cream Cheese Good for You?

In addition to being delicious, cream cheese is also versatile. You can use it to make both sweet and savory dishes. But is cream cheese actually beneficial for your diet? Learn the answer here! 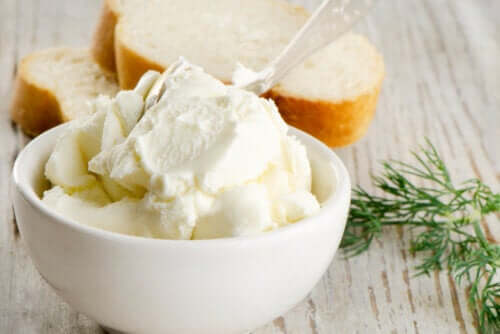 According to the Codex Alimentarius, cream cheese is a soft, spreadable, unripened, and rindless cheese.

The texture is spreadable and smooth to slightly flaky and without holes, and the cheese spreads and mixes readily with other foods. However, it isn’t a part of most healthy diets due to its high fat content.

But is cream cheese good for you?

In fact, the fat in milk may have some under-publicized benefits that we’ll talk about later. Also, cream cheese and its types, such as whipped, flavored, and others, are used to add a unique flavor to many sweet and savory preparations.

A lot of people eat this food due to its flavor, versatility, and texture. But do you know what each serving contains? Do you know how it’s made? Keep reading this article to discover the answers to these questions and more.

How cream cheese is made

As was published in the Journal of Dairy Science, the raw material for making this food is heavy cream or a mixture of cream and milk. The cream is pasteurized and transformed into very small fat droplets. Lactic acid bacteria are then added. Manufacturers then ferment the cheese and make it more acidic.

After that, they add salt and certain additives such as gelatin, starches, and other thickeners and emulsifiers, endorsed by the Codex Alimentarius. Finally, they add a curdling agent. The journal Foods states that this is an enzyme of plant or animal origin that breaks down milk protein to coagulate it.

Once firm, manufacturers mix everything before cold or hot packing. According to the Codex Alimentarius, it contains 25 grams per 100 grams of milk fat in dry matter and 67% water. Other fat values ​​vary according to the preparation.

According to the FoodData Central of the United States Department of Agriculture and the PAHO/WHO, 100 grams of cream cheese contains the following macro and micronutrients:

This dairy product is high in fat, of which 67% is saturated. It contains less protein, calcium, and phosphorus than other cheeses. It’s rich in vitamin A.

A good part of the fatty acids in heavy cream is very small, which favors their intestinal absorption. Professor Gaspar Ros comments that they can be used as quick energy sources.

One of them is butyric which, according to the journal Hospital Nutrition, benefits the colon cells and improves intestinal health.

You should also read: How to Make a Creamier Pasta Dish without Cream or Cheese

Heavy cream contains casein and whey protein. A group of experts reached a consensus that these are of high biological value since they contain many essential amino acids, such as lysine.

However, its protein content isn’t enough for it to be recommended in high protein diets.

The lactic acid bacteria added during its production degrade most of the carbohydrates in this product. According to the journal Agricultural Matters, these microorganisms transform lactose into lactic acid, which conditions the intestine to prevent the growth of disease-causing bacteria.

The main vitamin in cream cheese is vitamin A. This is important for visual development, bone growth, and the immune system.

One serving provides 84 micrograms of retinol, which represents 10% of the recommended value, according to the journal ALAN.

As in other cheeses, calcium and phosphorus are the most abundant minerals. However, they’re found in less quantity, as they contain less protein. A serving of one ounce a day barely covers 2% of the recommended calcium intake.

Traditional cream cheese has a lot of calories. Spreading 28 grams on a slice of bread or a biscuit represents a 90-calorie caloric intake.

Thus, you have to be careful with the energy intake of this product in your diet.

How to use cream cheese in the kitchen

The texture and flavor of cream cheese are the greatest culinary strengths of this delicious dairy product. You can use it to make both sweet and savory dishes.

The most common way to use it is to spread it on cookies, toast, and muffins, as an ingredient in fillings, for baked potatoes, or in sandwiches.

You can also make some delicious creamy dressings and serve them with pasta, fish, chicken, or vegetables. If you combine it with spices, the flavor will be explosive.

In baking, it’s perfect for fillings and toppings, such as for carrot cake. Ice creams also use cream cheese as a base combined with assorted fruits. Brownies and cheesecakes taste amazing when prepared with this product.

As Brighenti and other researchers highlight, the characteristics of cream cheese make it an ideal product to enhance texture. Adding two tablespoons to puff pastry and focaccia make them softer and richer.

You can dare to explore in the kitchen with this food. For example, a fruit or vegetable smoothie with cream cheese will make it creamier. Just let your imagination run wild!

The benefits of cream cheese

In addition to its nutritional supply, this product has some benefits that we’ll discuss below.

It may be a potential probiotic

According to the World Gastroenterology Organisation (WGO), probiotics are microorganisms that could improve intestinal health and enhance immune function.

According to the Journal of Biological and Health Sciences, this cheese is fermented with certain Lactobacillus that may have a probiotic function and are considered safe. Some works show the results of using Lactobacillus casei as a probiotic in this product to make it of optimal quality.

Many people don’t tolerate lactose in milk, since they lack the enzyme that breaks it down in the intestine. This causes bloating, gas, and diarrhea. Nevertheless, the journal Nutrients clarifies that some intolerant people can only withstand 12 grams of lactose a day.

One ounce of cream cheese contains up to two grams of lactose. As long as those who suffer from lactose intolerance consume it in moderation, it shouldn’t cause them any problems.

However, there are still no studies on its effect in these types of patients.

Astiasarán and Martínez stated in their book that the fat in milk contains carotenoids, such as beta-carotenes, lutein, and zeaxanthin. Young and Loug comment on their antioxidant activity, since they block the action of free radicals and their possible cell damage. Some carotenes have a direct effect on eye health.

Does this food have any contraindications? Yes, including the following:

This is a low-protein dairy product

A normal serving of this cheese only contains two grams of protein. Thus, unlike other cheeses, such as goat or cheddar, which contain seven grams per serving, it isn’t recommended for high protein diets.

Cream cheese is rich in saturated fat. A 28-gram serving covers 30% of the Daily Value for a 2,000-calorie intake.

The World Health Organization (WHO) recommends reducing saturated fats to less than 10% of total energy intake to prevent chronic diseases.

Cream cheese is a high-calorie food

This food is very caloric, meaning it isn’t included in weight loss diets. If you’re following one, you should avoid dishes where it’s the main ingredient. Experts recommend replacing it with light or low-fat cream cheese.

It has a very short shelf life

Despite the fact that cream cheese is pasteurized and destroys pathogenic microorganisms, Choi and other authors state that its high water content can increase the risk of contamination and shorten its shelf life.

According to some evidence, it has a two-week shelf life and must be kept refrigerated once opened.

Is cream cheese good for you?

The culinary properties and uses of this food that awakens flavors in different preparations are indisputable. But is cream cheese nutritious?

In moderation, it’s a good low in lactose source of energy and vitamin A. You can substitute traditional cream cheese that’s high in saturated fat and calories with other light versions to make it part of a healthy diet.

Although adding probiotic bacteria to it could also make it more competitive in the market of health-promoting dairy products, experts still need to conduct more studies in this regard.

Cream Cheese, Garlic, and Chives Stuffed Chicken
Are you planning on making a special dinner for your family but you still don't konw what to make. If so, you can make this stuffed chicken recipe. Read more »
Link copied!
Interesting Articles
Diet
What's a Cheat Meal?