The antiparasitic effect of Albendazole is due to its effect on microtubules found in the cytoplasm of parasite cells. It does not affect human cells. 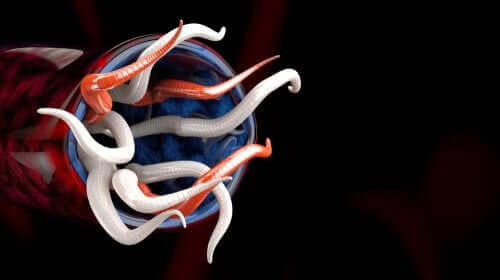 Albendazole is a drug derived from benzimidazoles. Doctors prescribe it in the treatment of various diseases caused by the infestation of parasitic microorganisms, both intestinal and of the tissue.

Its use is authorized for both adults and children over the age of 2 years at single doses or in short-term treatments.

Albendazole action in the body

The antiparasitic effect of albendazole is due to its effect on the microtubules found in the cytoplasm of parasite cells. It does not affect whatsoever on human cells. Furthermore, the antiparasitic can break down the cells by damaging their structures and so these lose their ability to fulfill their functions — secretory or absorptive.

As you can see, the secretory substances accumulate in the Golgi apparatus of the parasite. As a consequence, there’s an uptake of glucose and glycogen values as the energy reserve decreases.

Also, since most of the substances accumulating in the Golgi apparatus are proteolytic enzymes released into the cell, the one involved undergoes autolysis. The death of the cell leads to the death of the parasite.

Studies conducted have demonstrated the efficacy of this Albendazole in the treatment of infections caused by:

Find out what are The Most Common Symptoms of Intestinal Parasites

This varies according to the age of the patient and the disease to treat. For instance, the treatment of ascariasis, enterobiasis, and uncinariasis requires a single dose of 400 mg in adults administered orally.

Also, diseases such as trichuriasis, tapeworm, or fasciolosis as well as severe infections, require a daily dose of 400 mg administered for three days. The second line of treatment for this type of disease must begin as soon as it becomes clear that the clinical picture isn’t reversing after three weeks.

Children over the age of two must follow the same treatment adults get. Note that this medication is contraindicated for those who are younger than two.

This medication is contraindicated in many situations despite proving safe in clinical trials. In this respect, patients with a known hypersensitivity to it or its excipients should refrain from using it.

Also, the use of this drug in pregnant or lactating women isn’t recommended due to its possible effects on the baby. This is because there have been teratogenic and embryotoxic effects in non-human animal studies.

Finally, we must mention that there are no known interactions with other drugs. It’s for this reason that you must discuss the use of Albendazole with your physician if you’re going to take another medication at the same time. You certainly want to avoid health complications.

Read further and Discover the Most Common Food Parasites

Albendazole isn’t exempt from producing side effects — like most pharmaceuticals on the market.

Side effects are all unwanted, unintended events, expected in any drug treatment. People frequently report the following ones during treatment with albendazole in clinical trials:

Also, there have been some reports of cases of pancytopenia, granulocytopenia, and bone marrow aplasia.

Finally, Albendazole is a drug for the treatment of parasitic diseases. It’s essential to make rational use of this drug as its misuse can lead to serious health consequences.

Thus, you must consult your doctor or pharmacist, as only they can answer any questions you might have about it.

A Milk and Mint Remedy to Fight Intestinal Parasites
In this article, we'll share a surprising and effective remedy to fight intestinal parasites. With milk and mint, you can perform a natural treatment. Read more »
Link copied!
Interesting Articles
Medication
Trastuzumab: Therapy Against HER2 Positive Breast Cancer