How To Make Traditional Neapolitan Flan

In this article, we'll talk about a delicious, fast and simple recipe for this sweet dessert that we know you'll love. 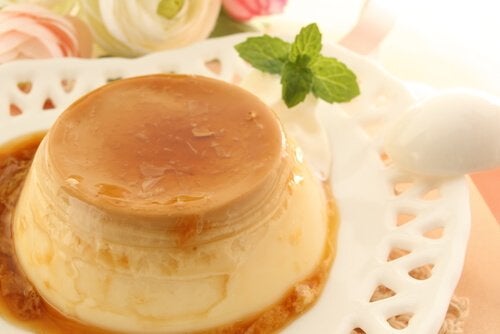 This is a special recipe for those who love desserts. It’s really easy and quick to to make and will have you salivating in delight. Would you like to try a traditional Neapolitan flan?

Flan is a dessert used in the majority of world cuisines. This is due to the versatility of this dish which means it can be made with all sorts of combinations of ingredients.

This dessert originates from Roman times, when they began to domesticate chickens and incorporate eggs into a range of recipes. Its first name was Tyropatinam.

Then, during the Middle Ages, people started to make a mixture of eggs, milk and honey, which was eaten during Lent. Over time, ingredients like pepper were substituted for caramel (due to the processing of sugar cane).

Flan is a French word which traditionally means flat cake. It was given this name in the seventh century when it became popular to make. As a result, this dessert is considered to have European origins and to be several centuries old.

This delicious delicacy is made from ingredients like eggs, milk, sugar, cream cheese, and a fairly thick layer of caramel made with a bain marie. Find out in this article how to make traditional neapolitan flan.

If you are planning a romantic dinner or a special gathering, this recipe is ideal for the occasion. It is quick to make and very simple. We recommend you try this delicacy in the company of a lover of cheesecakes or flans.

Did you know? Why do You Overeat at Night?

This is a very popular variation on the traditional neapolitan flan, and is equally delicious. All you need to do is add a few strawberries to your recipe and a touch of vanilla essence.