How Chronic Urticaria Affects Your Quality of Life

Chronic urticaria is the repeated appearance of skin lesions in the form of hives. It's a pathology that affects the quality of life of those who have it. We'll you what it is and how you can deal with it. 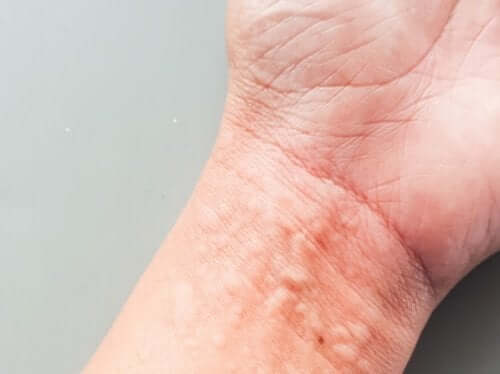 Chronic urticaria affects people’s quality of life and is a more frequent condition than one would think. Specialists estimate that 1% of the world’s population has it, with no significant variations between different regions. The most affected are women between the ages of 30 and 50.

Commonly urticaria is the appearance of reddish hives on the skin, accompanied by intense itching. These hives are of different sizes and can appear and disappear suddenly, as if they were changing place.

Common urticaria becomes chronic urticaria when they’re prolonged over time. Clinically, to diagnose it, the patient must have suffered it for more than six weeks in a year, even when considering the intermediate times without visible lesions.

The causal origin of this pathology is unknown, but specialists have determined that the treatment is about controlling the body’s allergic reaction. For this purpose, antihistamine medications and hygienic-dietary measures are usually prescribed.

The characteristic sign of the disease is reddish hives on the skin, with no particular predilection for any specific part of the body. What is constant, on the other hand, is the change in the places of appearance and the different sizes of the hives.

However, since not all the hives that appear on the body are caused by chronic urticaria, this is the list of symptoms that is considered for clinical diagnosis:

You may be interested in: Tips to Prevent Skin Diseases

Chronic urticaria and quality of life

However, records show negative results not only in these aspects, but also in the work environment. 25% of the patients miss work almost once a month. In fact, an association has been found between a greater effect on the quality of life and a lower economic income.

The close social circle of people who have chronic urticaria plays a very important role. They must know the pathology and its manifestations to avoid comments that could undermine self-esteem. When personal contempt increases, there’s less possibility of adherence to treatment.

Stress situations can make chronic hives worse. Even a small effect, such as increased scratching due to anxiety, is a cause of complications, as it could lead to a skin lesion that later becomes infected.

Such is the effect on daily life recorded among patients, that, according to global protocols, part of the medical evaluation is to apply instruments to measure quality of life to get to know the patient’s condition in depth.

One of the bases of treatment for chronic urticaria is the prescription of anti-allergy drugs. Among them, the most widely used are antihistamines. Here we have two groups and options based on those that produce drowsiness and those that don’t.

Among the antihistamines that produce drowsiness we can mention the following:

Among those with fewer side effects, perhaps the best known is loratadine, located in the same group as fexofenadine and cetirizine.

If skin lesions involve severe inflammation, doctors may prescribe corticosteroids as anti-inflammatory drugs. They’re medicines with a reduced use and for specific purposes, due to their adverse effects. The most recommended is usually prednisone.

For more information read: Corticophobia or Fear of Corticosteroids

In addition to medication, hygienic-dietary measures are fundamental for the improvement of the quality of life of patients with chronic urticaria. These measures will be the ones that contain the long-term symptoms.

Among the non-pharmacological indications, these are some of the most important ones:

Quality of life is the priority

Although all these measures combined won’t cure the disease, they’ll help improve the quality of life to be able to carry out the daily activities in the best possible way.

You shouldn’t let the disease become disabling or let it be a reason for alienation from personal relationships. Therefore, if this happens, we suggest seeing a psychologist.

Itchy Skin or Pruritus: Symptoms, Causes, and Recommendations
Itchy skin can cause discomfort, a constant need to scratch, and secondary injuries. Most of the time it's a disorder that resolves itself. Read more »
Link copied!
Interesting Articles
Illnesses
Everything You Should Know about Hypochondriasis