Two new scientific studies recently published information about the effectiveness of Gefapixant, a drug to treat chronic cough. Its advantage over the existing ones is the possibility of using smaller doses to achieve the same effect. 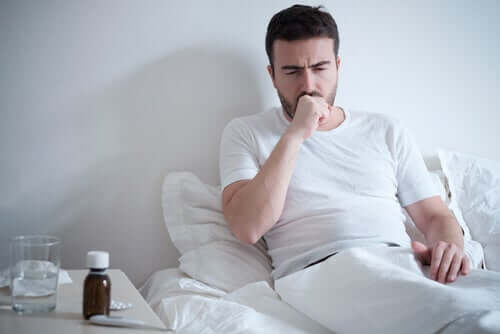 Gefapixant is a new drug that promises to relieve the symptoms of chronic cough — a rather annoying symptom that disrupts the quality of life of many people around the world. This symptom happens to people of any age and sex, so both men and women are equally susceptible to it.

Chronic cough isn’t always caused by a respiratory infection. There are actually other causes that can trigger it, including gastrointestinal ones.

This new drug under study, Gefapixant, could significantly improve the lives of those experiencing the disorder. We need to continue advancing through larger investigations and with different developments. However, hope is opening up for those with chronic cough, even those who’ve tried multiple drugs.

Studies on the effects of Gefapixant on chronic cough

The two most relevant studies published recently report on the effectiveness of the drug. One was larger and was carried out with a larger number of participants, and so its scientific methodology is more solid. The other one was smaller but its findings align with the first.

The biggest research was recently published in Lancet Respiratory Medicine. It evaluated the administration of 50 milligrams of Gefapixant in 253 patients. The dose lasted for 12 weeks and it improved the chronic cough of 80% of them.

The article reports there was also a positive effect with a lower dose in a particular group of subjects. With only 7.5 milligrams of Gefapixant, more than 50% of the patients reported less coughing.

The smaller study included only 57 individuals and the results made it to the European Respiratory Journal. They report that the 30-milligram dose was enough for cough management.

Read about The Causes of Chest Pain When Coughing

Beyond the medication in question, it’s important to understand what we mean when we say “chronic cough.” It’s difficult for those who don’t have a chronic cough to imagine the problems produced by it.

Medically speaking, a chronic cough is one that lasts for more than six weeks. Then, the episodes are either constant or appear repeatedly at the same time every year. Sometimes there’s a pause interval that repeats more or less the same.

Approximately 5% of the general population experiences chronic cough at some point in their lives. It can remit spontaneously after a while, or endure in spite of treatments. What’s certain is that there have been no new drugs to mitigate the disorder for several decades.

The most frequent causes of chronic cough are:

Some types of coughing aren’t necessarily isolated symptoms. The medical situation may include other symptoms such as epigastralgia, a pain in the pit of the stomach, heartburn (a burning sensation in the esophagus), wheezing, and dyspnea, a lack of air.

Find out more about the Symptoms, Causes, and Treatment of Chronic Cough

The advantages of Gefapixant

Interestingly, this drug wasn’t developed for the chronic cough. In fact, the active ingredient was initially formulated as an analgesic.

What happens is that its mechanism of action interferes with the P2X3 receptors of the nerves that regulate the cough. Moreover, the advantage is that it requires minimal doses to achieve the effect. Thus, there are few side effects.

Another advantage is the pharmacological field where the industry intends to position it. This is because it’s been a long time since there were any innovations in the treatment of coughs. This gave rise to all sorts of drugs whose effectiveness is unknown.

We still need further research to continue the path of approval and validation of Gefapixant. The pharmaceutical company behind the discovery is funding it and it’s currently on their third phase trials to obtain certification.

What Does a Cough with Green Phlegm Mean?
The color of the phlegm that accompanies a cough can, in part, help to diagnose different respiratory tract diseases. In this article, find out what a cough with green phlegm could mean. Read more »
Link copied!
Interesting Articles
Health and wellness news
Public Hand Dryers May Be Counterproductive, Study Says