Coronavirus (COVID-19) is rapidly growing in our country. That’s why it's so important to “flatten the curve” so that we can cope with this virus. In this article we’ll show you what an epidemiological curve is and what it means to stop it. 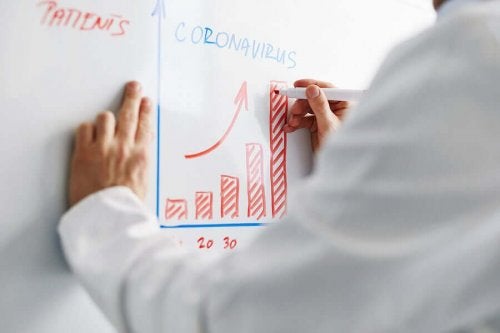 The term “flattening the curve” has recently been flooding the news and media. The first line of defense in stopping this virus from spreading is trying to stop it from rapidly growing. That’s why such drastic measures have been put in place over the last month.

COVID-19 is affecting many health care systems all over the world. We need to learn what its growth entails so we can combat it.

Even if the number of cases remains high over time, the fact that health care facilities are admitting at least the same number of infected people as they are discharging greatly reduces the burden on the health care system.

We’ve heard it many times before: mortality is not the biggest danger, but how quickly the virus spreads and its ability to collapse public systems. Therefore, we need to understand the growth curve of this virus and how to respond to it accordingly.

What do we know about it? This article will delve deeper into what the COVID-19 curve is, and the implications of its growth. Let’s find out what it is!

The epi curve and case representation

An epidemiological curve or epi curve is a graphical representation of the number of epidemic cases according to the dates the illness appears. It provides us with information about:

An extremely important value in the fight against COVID-19 is, without a doubt, to identify the first moment the virus was transmitted. To do this, it’s essential to see the period of exposure represented in the epi curve.

Unfortunately, we’re already too late for this. The virus started to spread at the end of February. By the time the authorities put drastic measures in place, thousands of patients were already in the incubation period.

Thus, follow-up papers, such as that of Joan C. Micó, professor at the Polytechnic University of Valencia (UPV), estimated that the virus would peak on April 6th.

This may interest you: The mutation of coronavirus explained

The Gompertz curve: the hope for stopping COVID-19

The Gompertz curve or Gompertz function is a type of mathematical model. It’s a sigmoid (long S-shaped) function that describes slower growth at the beginning and end of any given time frame.

Describing human mortality was its original function. Now, many epidemiologists use it. Especially for anticipating the development of COVID-19 on a global level:

The vision of the epidemiological studies is at a global level and not at an individual level: the fact that the number of cases is stabilizing the number of deaths in many places is already good news, although it’s still very high.

Once it stabilizes, this exponential curve flattens out to a Gompertz curve, and the worst could be over. But one thing must be clear: even if the growth of the disease slows down, complete eradication is practically impossible in the short term.

At the end of this pandemic (which will end) there will still be cases of COVID-19, but hospitals will be able to treat these much more thoroughly by a normally functioning health system.