Carbon monoxide is an odorless, tasteless, colorless gas. It often goes unnoticed and causes serious poisoning due to this. The good news is that there's a simple effective treatment for it if detected early. 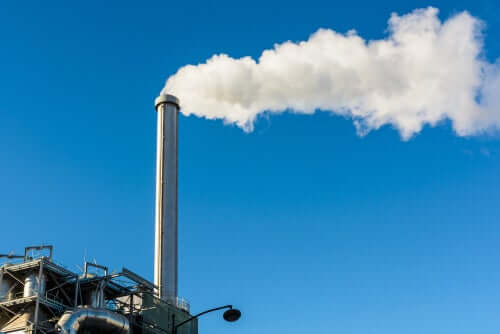 Carbon monoxide is a colorless, odorless, tasteless, highly toxic gas produced by the combustion of gasoline, wood, and coal, among other fuels. This combustion powers cars, gas stoves, and heating systems, among others.

This kind of gas is a silent killer that poisons about 1,500 people every year; up to 200 of them die. Most of the cases could be avoided as they’re mainly due to the misuse of equipment. Either that or the poor operation of gas appliances that are in unsuitable, poorly ventilated environments.

Carbon monoxide poisoning is a medical emergency that can go unnoticed. Continue reading to find out everything you should know about it and what to do if it happens around you.

People accidentally inhale this gas in their homes or during some of their daily activities such as cooking or heating a room. This is because the machines they’re using may either be malfunctioning or haven’t been properly maintained. Similarly, there are times when people use it as a suicide method.

What does carbon monoxide do to our bodies?

Cells called erythrocytes, also known as red blood cells, usually circulate in our blood. These blood cells contain a protein called hemoglobin, responsible for transporting oxygen. This protein is in charge of collecting the oxygen breathed into the lungs and then sending it to the tissues where the blood circulates.

Carbon monoxide toxicity is due to its higher affinity for hemoglobin than oxygen. Because of this, carbon monoxide binds strongly to hemoglobin and doesn’t allow oxygen to enter the blood. Thus, the tissues run out of oxygen, causing what’s technically referred to as tissue hypoxia.

You may be interested in Cerebral Hypoxia: Types and Causes

The symptoms are caused by a lack of oxygen in the tissues, and these are some of the most common:

If not treated in time, carbon monoxide poisoning will lead to a coma. Therefore, it’s dangerous for people who are exposed to it, especially while sleeping. This is because they can suffer irreversible brain damage or even die before someone notices there’s a problem.

The symptoms may not be so obvious in chronic poisonings and serious long-term damage may occur. These occur in the brain level, and are mainly:

In most cases, these symptoms occur without a person realizing the cause is gas. This is because, as we mentioned above, it’s odorless, colorless, and tasteless.

What to do in case of poisoning

Do the following if you think you may have been poisoned by carbon monoxide:

Once you’re away from the source of the poisoning, contact your nearest emergency room. Medical personnel can perform tests to check the carbon monoxide levels in your blood and suggest treatment immediately.

Treatment consists of injecting oxygen into the blood system to flush out the carbon monoxide from the hemoglobin and replacing it with O2. They usually administer this oxygen through a mask placed over the nose and mouth. Thanks to this, oxygen reaches the tissues.

In some cases, doctors will place an affected person in a hyperbaric chamber. This treatment involves breathing oxygen in a chamber at a much higher pressure than normal. It accelerates the replacement of carbon monoxide with oxygen.

How to prevent poisoning

According to the Centers for Disease Control and Prevention, you can take the following precautions:

Lastly, and most importantly, you should install a battery-powered carbon monoxide detector in your home. Don’t forget to check the batteries every daylight saving time change — spring and fall. Leave your home and call the emergency services if the detector alarm goes off.

What to Do About Medication Poisoning
When medication poisoning occurs, its degree will depend, among other things, on the amount of drugs ingested and on the characteristics of a person. Read more »
Link copied!
Interesting Articles
First aid
Steam and Hot Water Burns: Treatments and Recommendations

How many times have you been faced with an injury and not known what to do? In this article, we'll…

First aid
Should You Pop Blisters?

A blister is a raised and palpable skin lesion which forms in the epidermis and is filled with fluid. In other words, blisters are kind of fluid-filled sacks. It can…

First aid
How to Apply First Aid for Groin Strains

Are you an athletic person? Have you ever been diagnosed with a groin strain? "Groin strains" refers to a groin…

When sick, many people will feel like they have a higher than normal body temperature, along with other symptoms or…