What Are Ectoparasites? All about mites and Fleas

Most ectoparasites - like mites and fleas - produce itchiness and reddening of the skin. Some of them even act as vectors of serious illness, such as typhus. 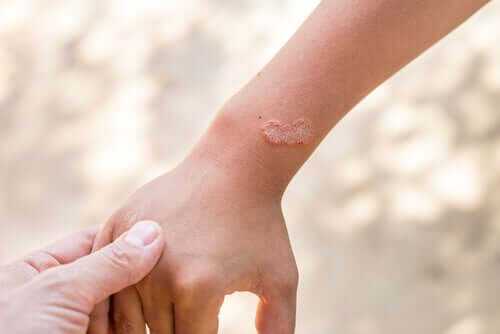 We’ve all heard of parasites before. They’re organisms that live inside or on the surface of another living being, obtaining certain benefits and, at the same time, causing certain problems to their hosts. Ectoparasites – like mites and fleas in particular – are parasites that live on the outer surface of other living things.

These types of beings often produce illnesses known as parasitosis. They’re common both in animals as well as human beings. As for humans, these kinds of diseases tend to appear in the summer and produce damage to the skin.

Some ectoparasites can be the means of transmission for serious systemic infections with disastrous consequences. What’s more, they’re not easy to irradicate. With that in mind, we want to share some important data regarding ectoparasites, especially mites and fleas.

What are the most common ectoparasites?

Ectoparasites are small organisms that live off of other living beings. In the case of human beings, this group includes a wide array of anthropods that are very different from one another.

In general, these types of creatures adhere to the surface of the skin and remain there for as long as the parasite wants. What’s more, these creatures can even penetrate the skin and live within the inner layers of our dermis. Once inside, we experience symptoms like itchiness and even allergic reactions.

The biggest problem with all ectoparasites, especially bloodsucking anthropods, is that they can act as vectors. In other words, they’re carriers of diseases like malaria and typhus.

Scabies (or mange) is one of the most frequent and well-known parasitoses, produced by a type of mite called Sarcoptes scabiei. Infections tend to occur in the form of epidemics, given that this little bug spreads easily from one person to the next.

What’s more, it can remain on clothing and sheets, making it even more difficult to get rid of. This ectoparasite digs small tunnels in the skin, producing lesions that cause the skin to itch. What’s more, these mites are especially predominant at night.

Mites are a wide category of ectoparasites. We just mentioned one specific type of mite that produce scabies. However, when most people talk about mites, they’re referring to those that cause allergies.

In this case, the family of parasites we’re talking about is Dermatophagoides pteronyssinus. This is a species that inhabits the dust that’s on our furniture or anywhere else. It’s a very tiny anthropoid that’s actually inoffensive to humans.

The only negative effect that they cause is allergies, which are the main cause of allergic reactions after pollen. The origin lies in that dead mites and their excrement form very fine dust that’s easy to inhale.

You may also want to read: Dust Mites? Kill Them Safely and Naturally

Like mites, fleas are also small ectoparasites. As adults, they feed on blood and are often found on dogs and cats, especially those that live on the street or in the country.

Fleas can act as vectors of many illnesses, the most important of which are typhus and bubonic plague. However, those that live on dogs and cats tend to transmit others, including tapeworms. What’s more, their bites produce itching and redness in the skin.

Keep an eye out for ectoparasites like mites and fleas

What we must remember is that ectoparasites encompass a wide range of parasites. It’s important to keep in mind that, if you have pets, you must take preventative measures against parasites according to your veterinarian’s instructions. That way, you’ll assure your pets’ health as well as that of your family.

If you have itchiness, skin allergies, or signs of small, minute lesions on your skin, you should see a doctor. Many ectoparasites are easy for professionals to detect at first glance, allowing you to begin treatment right away.

6 Home Remedies to Eliminate Lice
Pediculosis is a contagious external parasitic disease caused by the invasion of lice, mainly located on the human scalp. Find out how to prevent it. Read more »
Link copied!
Interesting Articles
Illnesses
Nipple Discharge: Causes and Recommendations

Interesting Articles
Treatments
Telemedicine: What Is It?