The Dangers of Instant Soup

Instant soup is one of the most accessible and affordable ready-made foods in the market. However, are they good for us? Find out in the article below. 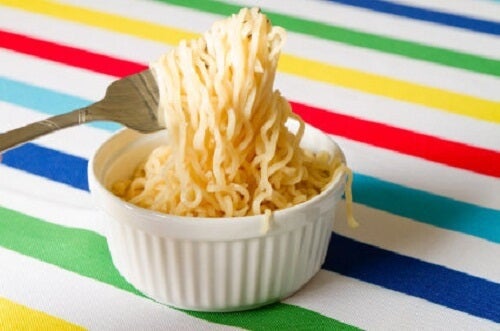 Instant soup is a fast food that has become quite popular in recent years. It’s an easy and cheap option for people without time to cook and/or eat something healthier. Also, even though people who eat them don’t necessarily consider them healthy, they tend to believe they are healthier than other fast foods.

However, people don’t know that this isn’t the case. Many studies, such as the one done by Dr Braden Kuo, from Massachusetts General Hospital, have shown that these soups tend to have a negative effect on the body.  Keep reading to find out more.

Studies have found that instant noodles remain intact in the stomach even after two hours. This is a lot more time compared to other types of homemade noodles. This has many implications in terms of digestion since your stomach doesn’t usually hold food for so long.

First, the digestive system can experience strong tension. This is true because it has to work for hours to digest these highly processed foods. When a food remains in the digestive tract for a long time, it also impacts the absorption of nutrients. Keep in mind that noodles and instant soups don’t offer many nutritional benefits.

Instead of nutrients, this type of food has a long list of additives, including the toxic preservative tertiary butylhydroquinone (TBHQ). It’s very likely that this additive stays in the stomach with the noodles. This can potentially cause serious health problems as it’s digested with the noodles themselves.

Only 5 grams of the TBHQ preservative can be lethal

Tertiary butylhydroquinone (TBHQ) preservative is a petroleum byproduct that can be tricky since it often appears as an “antioxidant”. However, consumers need to understand that even though synthetic chemicals can have antioxidant properties, they’re never the same as natural ones. Synthetic “antioxidants” stop the oxidation of fats and oils, lengthening the shelf life of processed foods.

Most processed foods, from most brands, use TBHQ. In addition, varnishes, lacquers, insecticides, make-up, and perfumes often contain it in order to lower the evaporation rate and make the substances more stable. Experts have found that as little as 5 grams of this additive can be lethal. In fact, the Dictionary of Food Additives states that being exposed to one gram of TBHQ can cause symptoms such as:

A recent study published in the Journal of Nutrition showed that women who ate greater amounts of instant soup had a higher risk of metabolic syndrome. This was compared to those who ate less, regardless of other eating habits or exercise. According to this study, the women that consumed instant soup twice a week were 68% more likely to get metabolic syndrome, which leads to many other more serious diseases like obesity, arterial hypertension, high blood sugar, triglycerides, and low levels of the good HDL cholesterol. Also, people that ate more instant soup had lower amounts of important nutrients, such as:

Furthermore, the levels of bad fats, calories, and sodium were higher.

The best thing is a balanced diet to enjoy good health

Even though eating instant soup every now and then isn’t particularly bad for your health, eating it a lot can create problems in the future. The best thing is to choose better and fresher foods, which are natural and healthy for the body. You should cut out processed foods from your diet. The easiest way to do it is if you plan meals ahead of time and follow through as the week goes on.

12 Worst Toxins in Processed Foods
We all know that processed foods are far from being the best food for us, but were you aware just how many toxins they contain? Read on and find out. Read more »
Link copied!
Interesting Articles
Did you know?
New Year's Traditions Around the World