Childhood alopecia is a disease that produces excess hair loss. In order to treat the problem properly, it's important to determine both the type of alopecia and its possible cause. 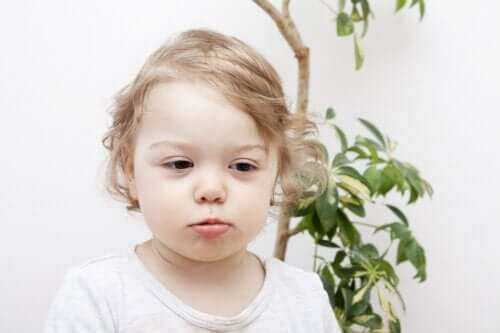 Childhood alopecia is the excessive loss of hair that can occur in children under the age of 12. At first, the problem tends to go unnoticed. That’s because many parents perceive hair loss as a normal symptom of the growth period.

However, in some cases, it can be quite noticeable. This is especially true because the volume of a child’s hair decreases and balds spots may even appear. What are the causes of childhood alopecia? How is it classified? In the article below, we’ll tell you about the most relevant aspects of this condition.

What are the causes of childhood alopecia?

According to information published by the American Hair Loss Association, 3% of pediatric visits in countries like the United States involve consults regarding childhood alopecia. For many parents, the problem causes a great deal of worry. This is not only because of its relationships with health problems, but also because of the emotional impact on children.

Fortunately, in most cases, the problem is temporary and tends to solve itself with proper professional intervention. However, in order to determine the right course of treatment, it’s important to first make a diagnosis. In other words, a specialist must establish the cause of the hair loss as well as the type.

In many cases, childhood alopecia in children is the result of infectious processes in the scalp or genetic factors. However, there are other possible triggers that can explain infant hair loss. These include the following:

What types of childhood alopecia exist?

As explained by an article published in the Annals of Dermatology, occipital alopecia occurs during the first months of life due to the evolution of the follicular cycle that takes place in the fetal and neonatal periods.

During the 20th week of gestation, the scalp already has follicles that are in the growth stage. As the months go by, these follicles enter the falling out stage. It’s at the time of birth when one can observe the abrupt loss of hair. In this case, treatment is not necessary as hair will repopulate the area on its own.

Triangular alopecia starts in the uterus. It’s characterized by the presence of a triangle-shaped patch that doesn’t possess hair. The patch typically appears on either side of the temporal region and doesn’t extend to other areas. This form of childhood alopecia is permanent. In other words, there’s no treatment.

Children that present this type of problem suffer an abundant loss of hair. In general, the loss occurs in association with the following conditions:

Treatment involves diagnosing the underlying cause and resolving that issue. Telogen and anagen effluvium are the most frequent variations of diffuse childhood alopecia.

You may also want to read: Is it Possible to Stop Losing Hair?

This is a chronic inflammatory process that originates in the immune system. Hair falls out on its own due to the abrupt halting of the follicles in certain areas, whether on the head or on the body (such as arms or legs).

In general, alopecia areata appears before the age of twenty and is treatable. The main causes are emotional tension or moments of intense stress. For example, exam period, some sort of emotional or physical abuse, or parental divorce.

Childhood alopecia as the result of traction

Ponytails, braids, and tight hairdos can cause hair loss in children. It results from the continuous pulling of the hair in certain areas. In some cases, it can be irreversible. Therefore, it’s important to avoid putting tension on the hair and leaving it free and relaxed.

Produced by severe cases of anxiety, children have a tendency to pull out their hair, which leads to alopecia. Treatment consists of psychological attention with the objective of discovering what’s causing the problem. It’s considered a nervous tic and is more frequent in the nape of the head and the bangs (fringe).

Also read: Is it Possible to Stop Losing Hair?

Alopecia due to ringworm

In this case, alopecia is caused by the presence of fungi and involves the appearance of localized hair loss. What’s more, ringworm can spread by direct contact between children. For example, at daycare or school or due to the sharing of a hairbrush or towel. It’s important to avoid the use of home remedies. Rather, a medical dermatologist should be the one to indicate the proper treatment.

Alopecia as the result of oncological treatments

This type of alopecia not only occurs on the head but also on the face and body. It’s best to avoid remedies and wait for oncological treatment to be over for hair to return.

Childhood alopecia: What else do you need to know?

In general, each type of alopecia is more frequent in a specific age group.

In any case, it’s always best to consult with a pediatrician or dermatologist in order to obtain a proper diagnosis. Once a professional determines the origin of alopecia, he or she will decide what are the best therapeutic options.

Multiple Pilomatrixoma Syndrome
In general, myotonic dystrophy is associated with Steinert disease. It may have genetic origins. In addition, it could also be a symptom of other diseases. Read more »
Link copied!
Interesting Articles
Illnesses
What Is Multiple Myeloma?