Cervicalgia: What Is It and What Causes It?

Cervicalgia is often accompanied by other symptoms such as tingling in the fingers or weakness of the arms. Keep reading to find out what it is! 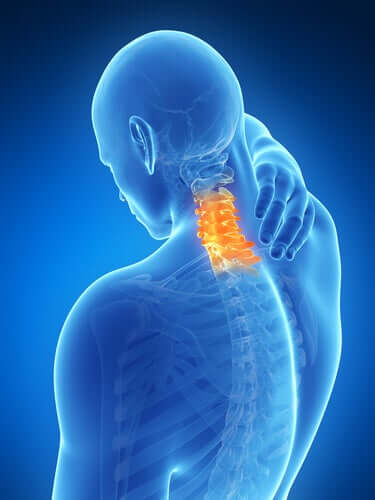 The word cervicalgia is the medical term for cervical pain. The cervical area is the area at the back of the neck, from the skull to the thoracic vertebrae.

It’s a very common issue that affects approximately 70% of the population at some point in their lives. Doctors estimate that about 14% of all sick leaves are due to neck pain.

Actually, cervicalgia involves more than just neck pain, since on many occasions this pain extends to the head or arms. In addition, it tends to limit the movements of all these parts.

Cervicalgia can have many causes. Normally it’s not too serious, but due to its effects on the life of those who suffer it, in this article we’ll explain everything you should know about it.

The cervical spine is a part of the spine that extends from the base of the skull to the thoracic area. It comprises 7 vertebrae and is characterized by being one of the most flexible parts of the spine. Cervicalgia refers to pain in this area.

It can be a painful sensation that extends to the arms, head or back. Sometimes, it can also be accompanied by other symptoms, such as tingling in the fingers or dizziness and nausea.

This cervical pain has many causes. It can be due to alterations of the muscles or ligaments, to injuries in the vertebrae or joints and even to nervous pathologies. In the same way, cervical pain is very often due to bad posture. For our body position to be correct, our head must be properly positioned on the neck.

However, many people have their heads positioned too far forward, which stresses the back muscles of the neck. Likewise, this posture tends to compress the rest of the cervical structures, which also causes cervicalgia.

You may like: Amazing Natural Remedies for Neck Pain

What are the causes of cervicalgia?

It’s true that most cases are the result of an overload of the neck muscles. However, we can summarize the causes of cervicalgia in the following categories:

This is the most common cause and affects the muscles at the back of the neck. They include the overloading of these muscles, contractions, strains, etc.

Traumas that affect the neck also tend to do so at a muscular level. The most common trauma is whiplash. It’s an injury that’s produced by extending or flexing the neck in a sudden and excessive manner.

Discover: Strengthen Your Neck Muscles with This Effective Exercise Routine

Neck pain can also be due to nerve damage, which, in turn, can be caused by many factors. They usually occur because of a herniated disk. This is an issue in which the disc between the vertebrae is displaced from its usual place. It then presses on the nerves and produces pain and other neurological symptoms.

On the other hand, cervicalgia can be a referred pain. This means that it’s actually pain that originates in another part of the body. For example, an injury to the shoulder or even the esophagus can produce this symptom.

Other diseases of the cervical spine

As we’ve already mentioned, numerous diseases can cause cervicalgia. Regarding those that directly affect the cervical spine, the main ones are cervical stenosis and osteoarthritis:

Cervicalgia is the term used to refer to pain in the cervical area. Although its causes are numerous and usually not serious, it’s important to go to the doctor so that they can perform the correct diagnosis and choose the appropriate treatment.

What are the Causes of Lumbago (Lower Back Pain)?
Lower back pain is annoying, but in more serious cases, it can be paralyzing. What are the causes of lumbago? Read on to find out more. Read more »
Link copied!
Interesting Articles
Illnesses
Nipple Discharge: Causes and Recommendations