Cerebral Embolism: What Is it and How Does it Affect Us?

Cerebral embolism involves the journey of an embolus from somewhere in the body to the brain, interrupting blood flow to certain neurons. It’s an emergency situation that can have serious consequences. 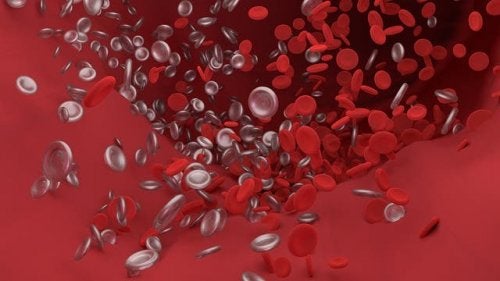 Cerebral embolism is a type of cerebral infarction. In other words, it’s a stroke that interrupts blood flow to a part of the brain. Unfortunately, it’s a very common pathology and an emergency situation. Here, we tell you everything you should know about it.

As we already mentioned, a cerebral embolism is a type of cerebral infarction or stroke. This means that, due to the interruption of blood flow in a blood vessel of the brain, the area of ​​the brain that was irrigated by that vessel doesn’t get the blood it needs.

When a tissue stops receiving blood, it also doesn’t get oxygen or other nutrients, since the blood is in charge of transporting these substances. What happens is that the cells that are part of that tissue first have a harder time performing their functions and, finally, end up dying.

The different types of strokes are based on the cause. Thus, a cerebral embolism is produced, as its name indicates, by an embolus that reaches a blood vessel in the brain.

This embolus can consist of different substances, such as a clot of cells and blood particles. The embolus travels through the vessels until it reaches one in which, due to its size, becomes blocked, preventing normal blood flow.

Causes and types of cerebral embolism

We discussed that an embolus can be formed by different substances. Thus, some of the main types of blood emboli and their causes are:

For clarification purposes, we should note that the difference between a thrombus and an embolus is that a thrombus occludes the vessel in the same place in which it forms, without detaching from the walls. However, an embolus travels through the circulatory system until it becomes stuck. Therefore, the causes and types of thrombus and embolus are the same in origin.

Read on to learn more: Nine Foods that May Help Reduce Your Risk of Thrombosis and Stroke

How does it affect the body and what are its symptoms?

The brain is the organ in our body that’s most sensitive to blood flow. This is because it’s made up of many cells, neurons, that constantly require a lot of oxygen. The interruption of blood flow in an area causes brain tissue to atrophy and die within a few minutes.

Symptoms of a cerebral embolism manifest suddenly. Also, there are cases in which they gradually manifest in hours. However, this is uncommon.

The symptoms will depend on the blood vessel it affects and the area and extension of the brain they transport blood to. Some of the most common symptoms of cerebral embolism are:

This article may interest you: 8 Warnings From Your Body Before A Cerebral Stroke

Cerebral embolism is an emergency situation. This is because the longer a brain area goes without irrigation, the more tissue will die, and the consequences will be more serious and irreversible. Thus, this condition requires a rapid recognition of symptoms and calling emergency services.

Once the emergency services have been called, the health workers are in charge of evaluating the patient’s condition. If necessary, medical professionals will request tests, such as a CT scan, to confirm that it’s a stroke and to classify it into one of the different types.

Once the doctor establishes the type of cerebral ischemia, the speed they treat it at will be essential. A cerebral embolism can be treated with drugs that dissolve the embolus or with surgery to remove it. This will depend on the type of embolus and its location. Thus, specialists decide the treatment that best suits each case.

Cerebral embolism is an emergency

It’s a common pathology and an emergency situation. Thus, it’s essential to recognize the symptoms and warning signs to notify emergency services. Then, they’ll decide the most appropriate steps to follow.

You must bear in mind that a person won’t always be able to recover all the functions they lost after suffering a stroke. This condition requires rehabilitation, whose duration will depend on each particular case.

First Aid for Strokes
A stroke occurs when there’s bleeding on the brain. Learn first aid techniques should someone you know suffer from a stroke. Read more »
Link copied!
Interesting Articles
Illnesses
Can Celiac Disease Cause Infertility?