Remedies, Symptoms and Causes of Endometriosis

Endometriosis is a disease that doesn't only lead to fertility issues. It can also seriously impede sexual relations along with causing pelvic pain, painful bowel movements and very painful menstruation. 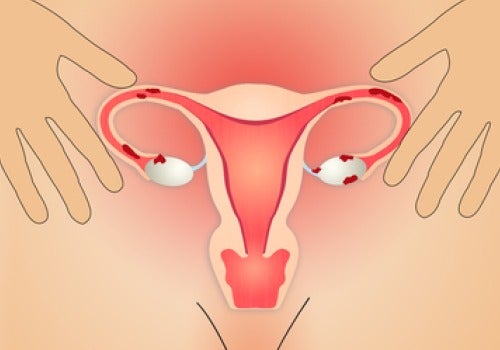 Endometriosis is a disease that doesn’t only lead to fertility issues. It can also seriously impede sexual relations along with causing pelvic pain, painful bowel movements and very painful menstruation. In this article we’ll be looking in great detail at the symptoms and causes of endometriosis, as well as some traditional and natural treatment.

Currently, there are a series of socio-economic issues that are generating some temporary imbalances when it comes to satisfying the desire to have children. Some common factors are economic hardship, the need for financial collaboration between both members of a couple, and the delay in finding the ideal home for raising children.

This means that, when it is finally possible to think about having children, the female physiology is not at its ideal time for child bearing. In addition to this, if the woman is still fertile, there are increasing difficulties to make reproduction unachievable.

From a medical perspective, experts define the causes of endometriosis as a combination of symptoms produced when the cells in the uterus lining grow outside of the womb. In other words, there is a growth of uterine cells in areas of the body other than the uterus.

These are cells whose purpose is to respond to certain hormonal stimuli. Because of this, there will be symptoms such as pain, irregular bleeding and difficulty becoming pregnant. Therefore, it is logical to conclude that the menstrual cycle deeply affects this abnormal cell growth.

The symptoms and causes of endometriosis

Although it may be difficult to believe, one of the causes of endometriosis and its symptoms is actually in the normal female menstrual cycle. Why is that?

Let’s remember that the uterus is like a type of bag or upside down glass. Its lining gets thicker as the menstrual cycle progresses so that the female body can be prepared to house an embryo. The body does this by means of an influx of very specific hormones (steroid hormones).

When the time comes and there is no conception, the body detects that what it has prepared is not useful and it gets rid of it. This is the menstrual bleeding that expels the layer of cells that had formed, and one of the causes of endometriosis.

What if these cells aren’t expelled?

But what happens if the body doesn’t correctly expel part of those endometrial cells that had been shed, and some of them stayed inside the body?

This is what happens in cases of endometriosis. The implantation of these types of cells exists outside of the normal cavity (the uterus) in varying areas. Such areas can be:

Furthermore, these cells that are re-implant themselves outside of their place continue to follow the “orders” of the hormonal influxes, since they are not dead cells. This causes them to bleed sometimes when the ovarian cycle is over. They do this because they are trying to “obey the order to shed”, but they are not able to be shed.

By the same token, as their growth is sometimes stimulated and sometimes not (also depending on the time of the cycle), this causes the typical symptoms that depend on the area of the body where they have implanted themselves. These are examples of the causes of endometriosis

Nonetheless, the real cause behind this issue is unknown. The cell growth outside of its normal place doesn’t occur due to the appearance or formation of these cells in strange places. On the contrary, it seems to be a “relocation” of cells that were originally formed correctly.

It is believed to be brought about by some type of reflux generated during the shedding of the lining, by some kind of retrograde menstrual flow. In other words, towards the back and inside. Certain anatomic alterations can cause this, as we will discuss later on in this article.

However, there are those who believe that women with endometriosis have some kind of immune disorder that has not been discovered yet. What is certain is that it is more common in women whose mothers or sisters have suffered from it.

Typically, this disease is diagnosed between 25 and 35 years of age, but experts believe that it probably starts around the time when menstruation becomes regular.

There are a series of factors that make it more likely for this disease to appear. These causes of endometriosis can be:

One of the most characteristic symptoms of endometriosis is pain. However, this doesn’t always occur even when a woman has endometriosis. The pain is usually in the lower abdominal area before or during menstruation. However, the appearance of pain is frequent at any point of the cycle.

Moreover, engaging in sexual relations can bring about the aforementioned pain as well. Likewise, this also happens when you go to the bathroom to have a bowel movement.

Furthermore, cramps may also appear one or two weeks before the menstrual cycle or even during it. Their intensity may vary quite a bit; they might be almost imperceptible or more intense.

The most complicated part of detecting endometriosis is when no symptoms are observed. However, in a case where the pain does appear, that is the most characteristic symptom. This is especially so when it links with the menstrual cycle in the way that we explained before. At that point, you should go to the doctor to undergo a series of tests.

These tests can either be very specific or not very specific. These tests attempt to discover if there is endometriosis or not and where the areas of implantation of the cells are. In other words, where the endometrial cells have been “relocated.” In this way, doctors can determine possible treatments.

To find the causes of endometriosis, specialists will normally carry out pelvic examinations. Gynecologists check the integrity and health of the female genital organs. They examine the vulva, the vagina, and the uterus. On top of that, they also check the cervix, the Fallopian tubes, the ovaries, the bladder and the rectum.

They will explore the genitals manually, and introduce a speculum to obtain samples of cytology. They may also use transvaginal sonography. This is a technique carried out with an ultrasound device that detects the signal emitted by a probe introduced into the vagina of the woman. During the examination, her genital organs are examined, including the uterus, the ovaries and the cervix.

Another option is a pelvic laparoscopy. With this technique, experts can examine the pelvic organs with a visualization instrument called a laparoscope. This is carried out under general anesthesia, and the doctor makes a surgical incision a couple of centimeters wide in the skin below the belly button. After that, carbon dioxide is blown into the abdominal cavity to help the surgeon see the organs more easily. Finally, he will insert the laparoscope, which is similar to a small telescope on a flexible tube which enables the doctor to observe the area.

The treatment will depend on a series of factors:

In addition, your specialist may recommend hormone treatments to treat the causes of endometriosis, although we prefer other more natural options. Traditional hormone treatment has to do with the use of birth control pills, since they stop the menstrual cycle and its hormonal influence on endometriosis. All this does is simply alleviate the symptoms of the problem, it doesn’t cure the disease.

A more specific hormone treatment aims to halt the production of estrogen by the ovaries. This causes a state that is similar to menopause, but it has the inconvenient side effect of giving rise to menopause’s symptoms as well.

We believe that hormonal treatments using birth control pills are too aggressive and that they cause too many damaging side effects to be considered effective. This is especially true when we take into account that they are not going to actually cure the disease itself. However, these treatments can partially or completely alleviate symptoms in many patients for years. The final decision is obviously in your hands.

And finally, as a last resort, modern medicine typically uses surgery to surgically remove the areas where endometriosis occurs. They normally recommend this in cases of extreme pain that don’t improve by using other types of treatments. This can include:

At any rate, we believe that you should only consider radical surgery in the most extreme cases. This is because there are wonderful therapeutic alternative possibilities in existence.

Read more: 5 Facts About Uterine Fibroids That Every Woman Should Know

Endometriosis could give rise to problems when trying to get pregnant. Not all women, especially those with mild endometriosis, will be infertile. Laparoscopy used to eliminate scar tissue associated with this affliction can help to improve your chances of becoming pregnant. If this is not the case, you should think about the possibility of undergoing treatments that help to fight infertility.

Other complications of endometriosis include:

In very few cases, the endometriosis implants may cause obstruction in the gastrointestinal or urinary tract, but this is very rare.

On very rare occasions, cancer may develop in areas of endometriosis after menopause.

Endometriosis Symptoms & Solutions to Know
Endometriosis is a condition that appears as small implants and cysts in the ovary, though it may also present with localized nodules. So, it's incredibly important to recognize endometriosis symptoms early in order to seek treatment. Read more »
Link copied!
Interesting Articles
Illnesses
Gilbert's Syndrome: Symptoms and Treatment