Causes of Red Spots on the Glans Penis

The best way to deal with red spots on the glans penis is to maintain proper hygiene in order to help prevent infections. What's the cause of this problem though? Continue reading to find out. 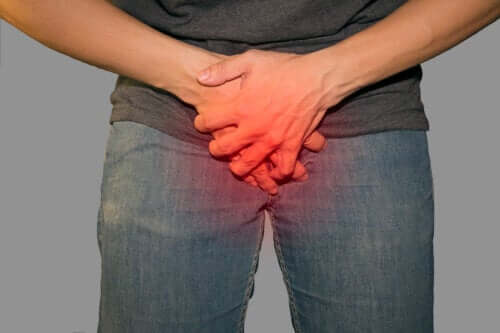 Red spots on the glans penis are relatively frequent and manifest in many ways and for various reasons. Most of them happen during sex and are, fortunately, transitory; thus, they resolve on their own.

It’s logical for any man to be frightened when discovering them though. This is why it’s always a good idea to consult a doctor – sometimes it could be a symptom of a major illness or even an STD.

The glans is the head of the penis and, as you know, it’s a little thicker and pinkish. It’s a highly sensitive area prone to irritation and also susceptible to many conditions.

Most of the problems in this area have to do with poor hygiene. However, this article will discuss other common reasons why red spots appear on the glans penis and what you can do to heal them.

Red spots on the glans penis due to poor hygiene

As you may already know, maintaining proper hygiene is the first step to avoiding most diseases, especially those of infectious origin. It’s even more important when it comes to the genitals as this area is more susceptible to the proliferation of bacteria and fungi.

Red spots on the glans penis are usually due to poor hygiene and usually lead to infection by candida or bacteria such as streptococci.

In the case of candidiasis, the red spots often bring about a burning and stinging sensation. As you can imagine, sex can be painful and only worsens the swelling of the penis which becomes redder.

However, you should know that candidiasis can also be due to reasons that have nothing to do with hygiene. For example, it could be related to the use of prophylactics or antibiotics.

Bacterial infections are quite common and often manifest through specific symptoms such as strong foul odors. In addition, they may be discharged from the urethra, although this varies depending on the bacteria that are causing the infection.

You must maintain proper daily hygiene with soap and warm water. Wash twice a day if you sweat a lot. Of course, use a condom when having sex so as not to spread any infections.

Find out What is Phimosis: What You Should Know About Tight Foreskin

Other causes of red spots on the glans penis

Red spots on the glans penis may also be due to sex. As we mentioned above this is a highly sensitive area and the skin can get sore due to friction. Actually, and as strange as it may seem, this area is quite susceptible to bruising.

Small bruises could happen after using sex toys, for example. Worry not, these usually disappear after a couple of days and are nearly painless.

Red spots could be a symptom of an allergic reaction as in any other parts of the body. In fact, many men are allergic to certain substances present in gels or soaps. The fabric of the underwear could also be the reason.

Red spots on the penis glans usually manifest with itchiness in cases of allergies and disappear as soon as there’s no more contact with the allergen.

Less frequently, these spots are a symptom of more serious diseases such as cancer. This is why it’s important to suspect them when you haven’t had sex, especially if there’s no itchiness or stinging.

Several studies assert that squamous cell carcinoma is the most frequent penile cancer. Furthermore, it often manifests with red spots on the glans penis. It’s important to detect it early so that treatment is still effective.

Red spots on the glans penis are usually benign and appear as a result of minor trauma or infections, many of them due to poor hygiene. In any case, it’s always best to consult a doctor and let them give you an accurate diagnosis.

The Causes and Treatment of Bumps on the Penis
Bumps on the penis usually happen during adolescence and they're mostly associated with men with acne in other parts of their body. Read more »
Link copied!
Interesting Articles
Anatomy and physiology
Why Are Some People More Sensitive to Pain than Others?