Anamu as Medicine: Properties and Contraindications

Traditional medicine has used anamu to relieve pain, reduce inflammation and improve memory. We'll show you more of its benefits, as well as its adverse effects, according to science. 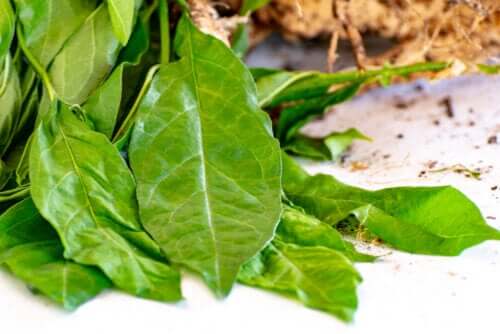 In complementary medicine, anamu has been used to reduce inflammation and pain, strengthen the immune system, and fight certain chronic diseases. This herbaceous shrub is native to the Amazon rain forest, although it also grows throughout South America, Central America, and the United States.

Mucura, apacina, tipi, guine, and guinea hen weed are other names by which the anamu or Petiveria alliacea, by its scientific name, is known. One of the peculiar characteristics of the root and leaves is their strong garlic odor. According to an animal study, specialists believe that this plant could improve brain function.

Properties and benefits of anamu as medicine

There are several benefits that anamu could provide as medicine. The most outstanding are the following.

Thanks to its plant compounds, anamu has antioxidant properties. It contains flavonoids, coumarins, triterpenes, and sulfur. These antioxidants have the function of blocking free radicals.

According to a review published in Recent Patents on Inflammation & Allergy Drug Discovery, free radicals are associated with chronic diseases and conditions, heart disease, brain disorders, and diabetes.

People have long used this plant traditionally to relieve pain and reduce inflammation. According to research with mice conducted by the Chinese Journal of Integrative Medicine, anamu reduces inflammation markers such as interleukin 6, prostaglandin E2, and tumor necrosis factor alpha.

On the other hand, Phytomedicine: International Journal of Phytotherapy & Phytopharmacology with an animal analysis found that anamu can significantly alleviate pain. On the other hand, research conducted with 14 humans suffering from osteoarthritis showed that anamu tea isn’t as effective as other medications.

We need more human studies to find out if it’s effective in this regard.

An animal study conducted by the Journal of Ethnopharmacology postulated that anamu has the potential to improve short and long-term memory, because the animals showed progress in learning tasks.

On the other hand, another study on animals confirmed that it improves long-term memory and reduces signs of anxiety, although it couldn’t ensure that it strengthens short-term memory. However, specialists must conduct research in humans to corroborate its possible benefits.

A test-tube study recorded that anamu contributed to the death of prostate, breast, lung, colon and pancreatic cancer cells, so specialists hypothesize that the extract of this plant could be effective in suppressing the evolution of certain cancers.

This is because it has active ingredients such as flavonoids, fatty acids, coumarins, and sulfur. However, we need more tests on humans and it’s impossible to consider it as a first line of oncological approach.

Anamu may have additional benefits such as the following:

Method of use and contraindications

Anamu is available over-the-counter and you can purchase it in different presentations: powder, tincture, dried leaves, or capsules. At present, we don’t have enough data to recommend an exact dosage, due to little research in humans.

Despite limited information, some supplement packages recommend 400 to 1250 milligrams per day. However, there’s no certainty about the amounts.

Research published in the Journal of Ethnopharmacology suggested that short-term consumption and a small dose may have low toxicity. However, in the long term there would be adverse effects such as confusion, tremors, drowsiness, seizures, and restlessness.

You should keep in mind that specialists don’t test anamu supplements for safety. Therefore, since no one regulates it, each manufacturer could handle doses different from those specified on the product label.

We recommend being especially careful if you’re consuming it at the same time as being medicated with an anticoagulant or a drug for heart conditions. Anamu already contains a small amount of a natural anticoagulant called coumarin.

Who shouldn’t consume it?

Since it’s a plant with little research for human consumption, we recommend that pregnant women, nursing mothers, and young children avoid taking it. If you’re taking medication, you should ask your doctor before trying any presentation of the anamu plant.

What to remember about anamu

Despite the many benefits attributed to it, this plant still needs more research to delve deeper into its properties and possible side effects.

The 6 Best Medicinal Plants with Scientific Proof
There's a wide variety of medicinal plants with scientific proof. That is to say, professionals have determined that they have potential. Read more »
Link copied!
Interesting Articles
Taking care of your body
Is Creatine Safe for the Kidneys?

Propolis is one of the natural ingredients that help oral health care. Due to its interesting pharmacological composition - which…