All About Acrocyanosis and Its Treatment

In this very interesting article, learn all about acrocyanosis, a condition that has no treatment. Read on to learn more! 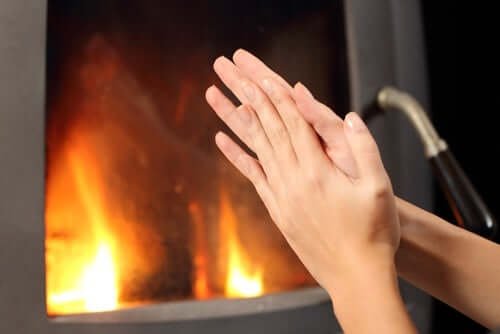 Acrocyanosis is a clinical picture characterized by a blue discoloration of the extremities, mainly the hands and feet. The word comes from the Greek, where “akro” means “extreme” and “kyan”, “dark blue”. It’s a persistent and painless bluish discoloration.

Acrocyanosis usually occurs in women. In fact, it most commonly affects the fingers of the hands. In addition, the cold or stressful situations usually trigger this condition. Below, we’ll tell you all about acrocyanosis and its treatment. Keep reading!

All about acrocyanosis: why it occurs

This condition consists of the bluish discoloration and coldness of the distal parts of the extremities. Sweating is also common. It’s due to an arterial spasm that the cold or emotional stress usually cause.

This condition is due to the fact that, as the arteries contract, it’s hard for the blood to reach the extremities. Similarly, they don’t get enough oxygen either. Thus, the fingers and toes tend to turn blue and cold.

Experts don’t yet know the etiologic factors of acrocyanosis. Patients who suffer from it tend to have immunological alterations. Firstly, there’s an elevation of antinuclear antibodies (ANA). The levels of these antibodies rise in autoimmune diseases. Circulating immune complexes are also found.

Acrocyanosis usually occurs in women in their 20s. However, it sometimes appears in childhood. Also, it’s been frequently observed in patients with schizophrenia. But this can’t be considered an etiological factor. Likewise, acrocyanosis has been linked to some medications. For example, beta-blockers and some chemotherapy drugs.

This article may interest you: Why Do You Have Cold Hands and Feet All Year Long?

The symptoms of acrocyanosis

As we mentioned above, this is a permanent peripheral vascular syndrome. It usually has a symmetric distribution. In addition, it mostly affects the fingers and hands, and the feet to a lesser extent. It’s important to note that the cold isn’t a trigger, as one might think. But it can worsen the symptoms. In fact, they’re less severe when it’s hot.

Although it’s a painless condition, it can sometimes cause greater sensitivity and pain. This happens if the outside temperature is very cold. Similarly, hyperhidrosis, or excessive sweat production, is common. It usually occurs in the palms of the hands. In addition, it worsens when it’s hot and when the patient is under emotional stress.

Acrocyanosis can cause self-esteem problems in the patients who suffer from it. This is mainly because it’s very eye-catching and noticeable but also due to said hyperhidrosis.

Unlike Raynaud syndrome, the blue discoloration persists in this condition. In fact, it isn’t easily reversed. It doesn’t cause trophic changes or ulcers, but it does cause pain.

You may like this article: Cold Hands: Some Possible Causes that You Should Know

Experts classify it into two types:

All about acrocyanosis: treatment

There’s no specific and effective treatment for this pathology. However, medical professionals recommend avoiding exposure to cold temperatures. Similarly, they advise minimizing stressful situations. Certain medication, such as calcium channel blockers, are sometimes prescribed to dilate the arteries. The problem is that experts haven’t proven their effectiveness.

It’s very important for medical professionals to explain to patients that this condition isn’t serious. Also, the patients need to understand that it’s a permanent syndrome, and that certain situations can aggravate it. If they have a good understanding of the mechanism that produces it, they’ll know how to best handle the situation.

Diagnosis of Skin Necrosis
Typically, skin necrosis is associated with external agents, infections, and, more commonly, a vascular occlusion process. Read more »
Link copied!
Interesting Articles
Illnesses
What Is Cyberchondria and How Do You Deal with It?