You'll probably be surprised by these interesting facts about common disease. We're sure you haven't heard them before! 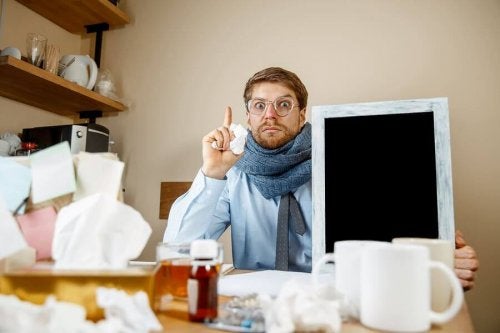 The human body and mind still hold endless secrets that science has not been able to reveal. However, over the years, researchers have been able to uncover several curious facts about common diseases.

In this article, we want to share some of these revelations with you. We’re sure that more than one will leave you speechless! Are you ready?

Different studies have concluded that each of us usually suffers from two to five colds a year. If you take into account the current life expectancy in Spain, for instance, (83 years), everyone will have suffered at least 166 colds in their life!

2. The cold virus is not just one virus

Of course not! In fact, there are more than 200 viruses that can cause the common cold. For this reason, the human body never develops resistance to this disease. Among the most common viruses that cause colds are rhinoviruses and coronaviruses.

Parents can attest that this is true. How many times has your kid caught a cold, gets better for two days, and comes home from school with snot hanging again?

4. A quarter of people with colds do not experience symptoms

We all know the symptoms of colds. After all, it’s one of the most common diseases.

However, not everyone knows that some people can be infected with one of the cold viruses and not have a cough, sneeze, or runny nose.

The reality is that measuring the speed of a sneeze isn’t easy, but this is what specialists calculated. For a bit of perspective, greyhounds can run 60 km/h!

In some cases, a sneeze can even exceed this speed and the saliva drops can fall up to five meters away!

6. Viruses from common diseases can survive on various surfaces.

When you sneeze, you spread the virus around you and it can stay active on different surfaces. For example, the flu virus can survive about 24 hours, and the cold virus, up to seven days!

Now, do you understand why it’s so important to cover your mouth with your elbow when you sneeze? That way, you avoid infecting others.

Read also: Things You Didn’t Know About Tears and Crying

7. The flu is constantly evolving

However, every year new strains of each type of Influenza appear. For this reason, vaccines can’t always protect you, and you may still end up getting sick.

8. In the last century, we’ve had several influenza epidemics

Today, the flu is a common disease that people don’t usually pay attention to. However, as we’ve already seen, it’s extremely easy to transmit through saliva and can also cause complications such as pneumonia.

As you can see, although you know how to act against common diseases, there are many facts you might not have known. We hope we’ve surprised you with some of these interesting facts.

10 Curious Things that Happen While You Sleep
Would you like to find out about a few interesting things that go on in your body while you sleep? Then read this article! Read more »
Link copied!
Interesting Articles
Did you know?
Why Do We Have Armpit Hair?