Getting some sun every day helps to get vitamin D, which is fundamental for the absorption of iron and combating iron-deficiency anemia. 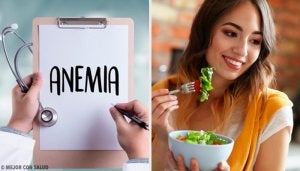 Below, we’ll tell you more about iron deficiency anemia, its causes, treatment, and other aspects of interest. Take note!

Iron-deficiency anemia is an iron deficiency that can be caused by a variety of issues. According to Mayo Clinic experts, in adults, the most common causes are:

It’s often said that heavy menstruation is the most common cause in the case of young women, however, it’s not the only one.

This disorder can also be a temporary imbalance due to an increased need for this mineral, for example, during adolescence, pregnancy, or breastfeeding.

The common treatment consists of oral iron supplementation as part of a balanced diet. As Dr. Evan Braunstein points out, “to fully restore the body’s iron reserves, iron supplements should be taken for a period of approximately 6 months after the blood count has returned to normal”.

Along with the treatment, it’s essential to follow a good diet and other good lifestyle habits. This is the only way the patient will be able to notice a real improvement.

How to combat iron-deficiency anemia without taking iron?

Although medical treatment will be essential to achieve improvement, there are some complementary methods that could be useful.

According to beliefs, hydrotherapy (which is a revitalizing aquatic therapy that takes advantage of water at different temperatures and pressures) could be an adjuvant treatment for iron deficiency anemia. Specifically, it’s believed that the water could stimulate circulation and, as a result, the production of red blood cells.

Although there’s no scientific evidence that this is so, there are those who choose to try it. To do so, they take warm baths for feet and arms and cold baths for chest and back.

Folate is one of the B vitamins. Therefore, it’s naturally present in fresh produce. However, there’s another form of folate called folic acid, which is added in fortified foods and some vitamin supplements.

Folate can be found in fruits (such as oranges), legumes (such as beans), and parts of beef (especially liver). At the same time, folic acid’s found in corn flour (used to make tortilla dough) and other fortified cereals and breads.

So, eating a balanced diet, including foods rich in folate, is another way to combat iron-deficiency anemia.

Many people believe that in order to increase iron in the diet they must necessarily increase the consumption of red meat. However, this does not have to be the case.

So the best thing we can do to overcome iron-deficiency anemia in a healthy way is to incorporate a salad with ingredients rich in iron, folate, and other nutrients, to each meal.

The salad can consist of:

Iron is much better absorbed together with a source of vitamin C or ascorbic acid. Therefore, we can take a daily supplement of this vitamin or, alternatively, get into the habit of always seasoning our dishes with a squeeze of fresh lemon juice to combat iron-deficiency anemia.

Other foods rich in vitamin C are:

Discover: The Most Vitamin-Filled Foods

5. Be careful with dairy products

In the same way that vitamin C improves the assimilation of iron, milk and its derivatives have the opposite effect. For this reason, if we have iron-deficiency anemia, we should reduce the consumption of these ingredients. Or, at least, consume them separately from other foods.

If the iron deficiency is a consequence of too heavy menstruation, in addition to following the above advice, we should also consult with the gynecologist about the best way to regulate the menstrual cycle.

Want to know more? See: Reduce the Symptoms of Anemia with Nettle and Lemon

One of the simplest and most pleasant remedies to prevent and treat iron-deficiency anemia is to sunbathe a few days a week, with sun protection, of course.

However, we should not sunbathe without sunscreen, as it’s a risk factor that can damage the skin and health. It’s important to acquire this habit whenever possible, as a lack of vitamin D is also related to this type of anemia.

There are many ways to combat iron-deficiency anemia. The ones we propose here should be discussed with a doctor before putting them into practice and you should never stop treatment.

However, as mentioned above, they have been highly effective for many people, although science is still investigating some of them.