5 Signs Your Relationship Has Come To An End

If you’ve reached the point that you don’t love your partner anymore and you can’t tolerate certain habits or actions, it’s best to end the relationship and avoid prolonging the suffering. How can you identify these signs? 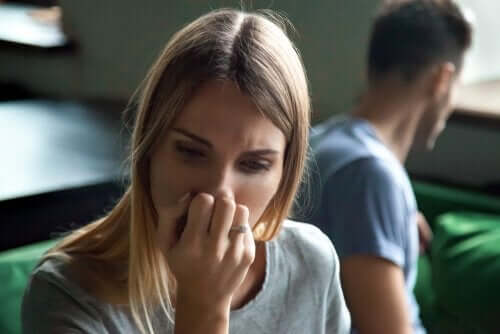 In every relationship there’s a beginning and an end, although the latter is something we would usually prefer to avoid. Nevertheless, no matter how hard you try to deny it, there may come a time when you truly have to close the door. Do you know how to tell when your relationship has come to an end?

It’s not easy to determine when it’s time to end things, when you’ve gone as far as you can go together. It can be extremely difficult because you’re afraid. Still, sometimes it’s for the best. That’s why it’s important to be able to recognize the signs that there’s no turning back.

Signs your relationship has come to an end

There are several signs that a relationship has come to an end. Below, we’re going to look at the main ones so that you can take them into account when deciding what’s best for you and the other person in the relationship.

Every breakup is difficult, but sometimes they’re necessary. It’s better to get through this difficult time than to drag out a relationship that truly isn’t working.

1. Without love, there’s no relationship

The first of 5 signs that the relationship has ended is that there’s a lack of love or affection. When there’s no affection, the healthiest thing to do is admit and put an end to relationship so you can move forward.

Over time, love can sometimes wear thin or disappear. This should make you evaluate your situation because the truth is there’s no such thing as a loveless relationship. Don’t beat yourself up over this; in fact, it’s very common.

Sometimes the routine or simply getting past the initial phases of infatuation can cause you to see the person you once loved with fresh eyes.

Now you can see everything more clearly, and unfortunately, you’ve become aware of the fact that love is gone. Then, it’s time to end the relationships for the good of both people.

Another sign that a relationship is over is a lack of trust. This may seem obvious, but in many cases, you can overlook this by trying to keep the relationship or “get it back.”

Without trust, it’s impossible for you to establish a healthy bond. Suspicion and uncertainty cause discomfort that isn’t pleasant for either member of the couple.

If your relationship is based on lies, mistrust, jealousy, or infidelity, this can destabilize the couple to the point that you begin to believe the relationship has come to an end.

3. There’s no longer a mutual bond

Sometimes you might not be aware that you’re no longer in a real relationship. You might think it’s something that can function on its own and ignore the fact that it’s a tremendous amount of effort and true hard work.

If only one person is putting their interest into the relationship it can cause them to become bitter. Resentment can appear making it even harder to maintain the bond.

Therefore, lack of interest of one of the two members of the couple (or both, as the case may be) is another sign that indicates the relationship has come to an end.

There are sings that will help you open your eyes and tell you that the healthiest thing to do is to end the relationship that isn’t moving foward. Pay attention!

4. Before, you were attracted, now you can’t stand them

Another sign that a relationship has come to an end is that what you used find attract, you can’t tolerate now. These can be simple things, like the scent of their perfume, their mess, or more complex issues, such as the relationship between the couple and their family or friends.

During the infatuation phase, it’s easy to feel so happy and lucky that you only see the positive, good things in your partner. As time passes, this can change, causing everything that once attracted you to suddenly becomes unbearable.

This can confuse your partner because they may have gone a long time without changing their habits that now make your hair stand on end, and yet you never complained before. The problem is that now you have to deal with it, but you feel like you can’t. You’ve reached an impasse.

When two people decide to join their lives, they need to share a vision of the world, have similar goals, a life in common and similar values. What if some of those things start to change?

People can and do change, and that includes their perceptions of the world and the things around them. The problem is that this can cause you to stray away from the path of your partner, leading to problems.

When there are several differences that both parties consider irreconcilable, it’s time to rethink the relationship. It’s not worth it for both you to compromise if neither of you is going to be happy.

Breaking up can be difficult, but it’s necessary

Breaking up is a painful, powerful thing because when you start out any relationship it’s supposedly for life. But if the time has truly come, it’s best to end it rather than to be foolish, holding on until it collapses under its own weight.

It’s important that you know how to face reality, act like an adult, and identify these signs that your relationship has come to an end. It’s a natural process, something that happens often, so don’t resist it any longer than you should. Sometimes it’s best to move on.

7 Things that Destroy Relationships
Many breakups and problems could be prevented if you could avoid these things that destroy relationships. Find out what they are! Read more »
Link copied!
Interesting Articles
Relationships
How to Put an End to a Toxic Friendship