If you have a high level of uric acid in the blood, the kidneys can have a hard time getting rid of it, which can cause some health problems. So, what causes high levels of uric acid? 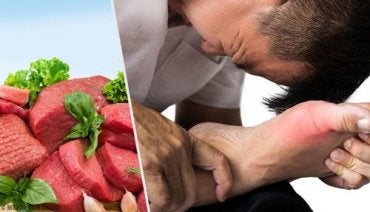 High uric acid in the blood is called hyperuricemia (University Hospital of Burgos).  In order to maintain normal levels, you need to reduce your intake of certain foods, foods rich in purines. Excess uric acid is eliminated through urine or through the intestines. Otherwise, it can build up in the joints and form crystals.

High levels of uric acid can be bad for your health. It’s important to keep it at the right level or reduce it if it’s higher than it should be.

Gout tends to be more common in men than in women, according to the Mayo Clinic. People suffering from gout are usually middle-aged. It’s uncommon before the age of 30, and the risk increases with age.

One-third of the uric acid that exists in the human body comes from food and drink which is rich in purine. The other two-thirds are produced naturally by the body. Therefore, it’s important to know the causes of having too much of this acid.

Although it doesn’t tend to be the only cause, it’s a very important factor in controlling this illness. This study from the University of Glasglow found that eating foods that are rich in purine such as meat, offal, fish, sausages, or burgers produce higher levels of uric acid. Also, eating a lot of salt doesn’t help.

Eating a lot of food that’s rich in sugar, such as sweets, refined sugar, sweet pastries, sugary drinks, processed fruit juices or chocolates, can also cause this problem.

A study from the University of San Sebastian (Chile) found that foods that are very rich in sucrose and fructose can also increase your uric acid levels. That’s because they are closely related to the gene SLC2A9 (which codifies the glucose and fructose transporter GLUT9). Therefore, the best thing is to avoid them. Try to stick to a diet based on fruit and vegetables.

Drinking alcoholic drinks can cause problems with the hepatic metabolization of uric acid, causing the alcohol to build up in the body and increase uric acid levels, according to the aforementioned study from the University Hospital of Burgos.

These medications increase the production of urine to help control high blood pressure. However, with it, the kidneys eliminate more water, increasing the risk of high uric acid due to the inability of the kidneys to process it. That is according to a study from the 21st Century National Medical Center in Mexico City.

5. Obesity or being overweight

A study from the Mariana Grajales Coello Medical University (Cuba) found that weight influences the risk of developing gout, which is an illness that occurs when uric acid builds up and forms crystals in the joints. This is true because obesity, hypertension, and diabetes increase the production of uric acid in the body and make it more difficult to process and get rid of it.

If you have mild hyperuricemia then you can easily treat it with changes in your diet. For instance, foods that contain a lot of fibre can reduce the uric acid levels in the blood and encourage your intestines to absorb it better. This study from the University of Ljubljana confirms that fiber is key for fighting and preventing gout.

Foods that contain a lot of fiber:

Avoid foods such as:

Keep yourself hydrated: It’s important to increase your liquid intake, above all, your water intake to encourage the elimination of uric acid through your urine. Findings from a study from the University of Navarra confirm the importance of hydration to prevent hyperuricemia.

10 Home Remedies for Excess Uric Acid
Uric acid is a waste product your body produces when you metabolize purines, a compound that’s found in certain foods. This substance travels through your bloodstream and is later eliminated through the urine after being processed though your kidneys. Read more »
Link copied! Next
Interesting Articles
Illnesses
Is it Possible to Be Allergic to Electricity?