What is Venous Thromboembolic Disease?

Venous thromboembolic disease consists of the formation of a blood clot in some part of the body. Later, the detachment of this clot occurs. It's a life-threatening condition. Learn more about it in this article. 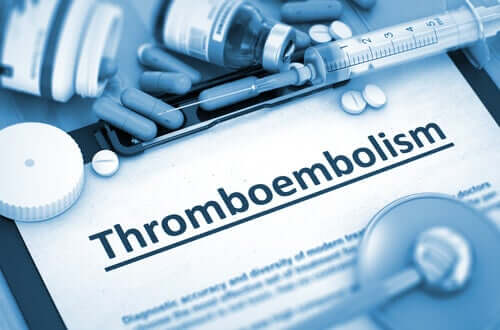 Deep vein thrombosis, or DVT, is the formation of a blood clot in one of the veins of the body. The most common location is the deep veins of the lower limbs. It can also originate elsewhere, although much less frequently.

In general, the next step after deep vein thrombosis, if there’s no treatment, is pulmonary embolism. It happens when the clot in the deep vein breaks off and travels through the circulatory system. The thrombus is said to have become an embolus, which eventually gets stuck in a pulmonary vein.

Changes occur at the site where the clot that gave rise to the deep vein thrombosis was located. The changes in question are the culprits of post-thrombotic syndrome. The legs that harbored the thrombus swell, turn blue, and may even ulcerate.

As we’ve seen, thromboembolism requires, first of all, the formation of a clot. And for clots to form in the veins, certain conditions must be met.

Therefore, there are people with certain risk factors who are more likely to suffer thromboembolism than others. It’s these people who must take certain precautions beforehand to avoid complications.

One risk situation is venous injuries. When large fractures injure the walls of the veins or injuries to the muscles that contain venous tracts in their interior, the site can become thrombosed.

There’s also a high risk of prolonged prostration. This can happen to patients who undergo major surgery and are prescribed extensive bed rest to recover. Also susceptible to thromboembolism are those who wear casts due to fractures, especially in the lower limbs.

In women, any period of life with increased estrogen increases the likelihood of deep vein thrombosis. Menopausal women who are prescribed hormone replacement therapy should be closely followed, considering that such therapy is performed with artificial estrogens.

Also at risk are those who people who:

The three forms of thromboembolism or venous thromboembolic disease have their own particular signs. In deep vein thrombosis or DVT, the patient may not be aware of his or her condition. It’s a condition that sometimes occurs silently until finally manifesting itself with major and dangerous signs.

If DVT manifests symptoms, these consist of swelling of the thrombosed site, skin color changes, and pain. The most common location is the legs.

When the problem has progressed and pulmonary embolism has occurred, symptoms are acute and life-threatening. They’re evidence that a clot has migrated to the lung, obstructing the flow there.

A person with pulmonary embolism feels dyspnea – that is, shortness of breath – and chest pain that worsens with breathing. Sometimes the embolus causes them to cough up blood, the technical name for which is hemoptysis.

Keep discovering: Chest Pains – Why Do They Happen

Thromboembolism is quite frequent. In fact, for every hundred thousand inhabitants, there’s an average of one hundred and fifty cases per year. What’s more, the higher the age, the higher the prevalence.

At the same time, venous thromboembolic disease still has a high lethality. It’s estimated that up to 10% of deaths in hospitals are attributable to an episode of thromboembolism. In the general population, it’s the third leading cause of cardiovascular death.

For all these reasons, prevention is essential. The necessary measures should be taken to avoid the formation of clots, thrombi, and emboli, especially in those people who are more prone to suffer them.

To this end, the following measures are advisable:

Finally, upon the appearance of any symptoms suggestive of thromboembolism, it’s crucial to have an immediate consultation with the physician or specialist.

It’s a condition that doesn’t allow you to take your time. Treating venous thromboembolic disease as soon as possible can even save your life.

Blood Clots: Watch Out for These 8 Signs
When blood clots form in blood vessels, it's risky for health. A blood clot is a blood mass that changes from being in a liquid to a gelatinous or semisolid state.  Read more »
Link copied!
Interesting Articles
Illnesses
Joan Massagué and the Origin of Cancer Metastasis