Erythrocyte Sedimentation Rate: What Does the Procedure Consist Of?

The erythrocyte sedimentation rate is a laboratory test that specialists use to determine the presence of inflammatory and neoplastic illnesses. In this article, we tell you how it's done and when doctors prescribe it. 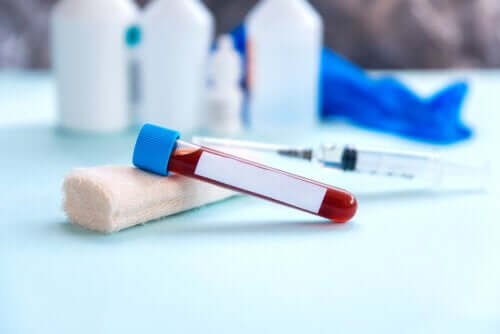 Clinical laboratory tests are very important in medical practice. Sometimes these are the only way to determine the presence of an illness. One of the most commonly administrated tests is the erythrocyte sedimentation rate.

Also known as Westergren sedimentation rate, ESR or SED, it’s a test that measures the speed at which the red blood cells deposit at the bottom of a test tube. A higher or lower speed than normal can indicate the presence of different medical problems.

In normal conditions, the erythrocytes or red blood cells have a negative charge. This causes them to repel each other with a sedimentation rate of 10 millimeters (0.039 inches) per hour. Nevertheless, the same can vary depending on the subject of the study and their lifestyle.

Reasons to have an ESR

Erythrocyte sedimentation rate is a test that helps to direct the specialist and allow them to detect the existence of illnesses. In this sense, it can be useful when facing the following situations:

However, the doctor should analyze what the patient’s symptoms are, along with the laboratory exam results. By doing this, they’ll be able to give a certain diagnosis. Furthermore, specialists can use the ESR as important diagnostic criteria for two illnesses: polymyalgia rheumatica and temporal arthritis. Both illnesses are very rare and tend to only appear in patients over 50 years old.

You can also read: 7 Ways to Combat Iron Deficiency Anemia Without Taking Iron

How should I prepare myself for this test?

It’s a fairly simple and quick test, which doesn’t require any kind of extraordinary preparation. If you’re only undergoing an erythrocyte sedimentation rate, then there’s no need to fast, but if the medical professionals will carry out other analyses at the same time, you should take the appropriate action.

In order to do the test, a specialist will have to draw venous blood with a syringe. This should be taken from the arm. This can also mean that during the test, you may feel a slight pain or annoyance, which can sometimes last for the rest of the day. However, it shouldn’t impact your ability to carry out other daily activities.

The blood analysis portion of the test is very simple and will usually follow the Westergreen method, where specialists mix 2 ml (0.004 US liquid pints) of blood with 0.5 ml (0.001 US liquid pints) of citrate in a test tube and then measure the erythrocyte-free distance.

After an hour, they measure the distance between the red blood cells again, in millimeters, to determine the speed at which they descended.

What does a high erythrocyte sedimentation rate mean?

When the sedimentation speed is above the normal values, it could suggest the presence of illnesses that develop with inflammation and some neoplasms. According to some studies, the rate increases over a 24 hour period and doesn’t usually return to normal values until after resolution.

These kinds of illnesses increase the concentration of diverse proteins in the blood plasma. Each of these proteins, especially fibrinogen, will affect the surface charge on the red blood cells, making them descend at a higher speed.

Nevertheless, different situations that increase the fibrinogen in the blood, such as pregnancy, diabetes, or renal insufficiency in terminal stages are capable of increasing the erythrocyte sedimentation rate. Among other causes, we can mention the following:

You may also like: Lymphoma is Treatable if Detected Early

What does a low erythrocyte sedimentation rate mean?

Most of the time. a low erythrocyte sedimentation rate doesn’t hold much medical relevance. In this sense, the level can reach 0 mm (0 US liquid pints) in normal patients, and so isn’t usually a cause for concern among specialists.

However, a low erythrocyte sedimentation rate, between 0 and 3 mm (0 and 0.006 US liquid pints), is associated with diverse health problems. Among those, the following stand out:

And if that wasn’t enough, infectious illnesses like dengue can cause the sedimentation speed to slightly slow down. A study in which the ESR patients with the illness had a significantly lower rate in comparison to others with acute febrile syndromes demonstrates this.

A simple yet effective test

As you can see, the erythrocyte sedimentation rate isn’t a complex test, but it is very useful when searching for the presence of illnesses that develop with inflammation. The same can direct the doctor and help them to give an accurate diagnosis.

Regarding the patient’s role in this, there’s no special preparation that they need to do before having the test. Furthermore, after the procedure, they’ll be able to continue their daily activities with no inconvenience!