Description and Characteristics of Colostrum

Some people refer to colostrum as "liquid gold," because this substance is rich in elements that are decisive for the good health of a newborn. Thus the importance of breastfeeding. 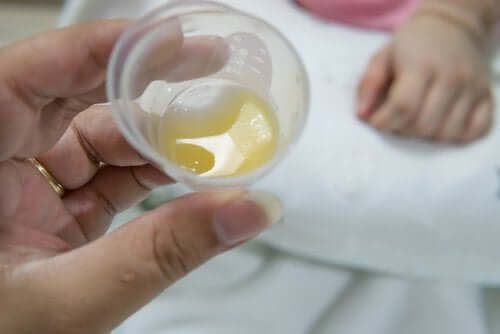 Colostrum is a substance present in the first stage of breastfeeding and its properties are quite significant. Actually, it’s one of the reasons why mothers must breastfeed their children, especially after they’re born.

Specifically, the colostrum is the precursor of breast milk and is secreted by the mammary glands. In fact, it’s present during gestation and also during a few post-birth days.

This natural food contains everything a newborn needs in the early stages of their life. This is why some refer to colostrum as “liquid gold.” Indeed, it’s the best thing a mother can feed her child after birth.

What exactly is colostrum?

This thick secretion is often yellowish, although it can also be clear. Its production begins around the third month of pregnancy and should be the first thing a baby drinks after they’re born – under normal conditions.

The amount of colostrum actually increases if the infant breastfeeds regularly. It can go up to 20 milliliters per feeding, enough for the baby’s needs during the first three days after birth. Note that this fluid isn’t exclusive to humans; it’s present in most mammals.

Some people also describe it as the first milk excreted postpartum by a mother. A fabulous nutrient that provides immune protection to a baby. We could even go as far as saying that this substance is basically a vaccine for a newborn.

The properties of colostrum

Colostrum is pale at first and then turns yellow. Then, the breast milk becomes lighter and lighter in color and acquires the characteristic light yellow after three or four days. This is transitional milk though. Thus, it isn’t the same as that of other animals; it contains more nutrients.

A mother can produce between seven and 120 milliliters of colostrum in one day. This substance has the same taste as amniotic fluid so it makes the baby feel safe. That line of continuity helps them adapt to their new life.

Read about Breastfeeding and Female Sexuality

The first contribution of colostrum to a baby’s life is that it completely satisfies their energy needs. It also prepares their body for subsequent feeding by promoting the development of their intestine and contributing to the proper functioning of their kidneys.

One of the most relevant benefits is that this substance has a high concentration of immunoglobulins. These allow the newborn to defend themselves against bacterial and viral infections. In addition, it contains beta-carotene. This is the element that gives the milk its yellowish color and acts as a precursor of vitamin A.

Vitamin A is also essential for protection against infections and helps an infant’s retina develop properly. Likewise, colostrum provides an important dose of white blood cells, which help against infectious processes.

Find out more about Medication and Breastfeeding

Some women are insecure during the first days of breastfeeding because, even though their breasts are hard, they don’t see any milk coming out of them. Thus, they think they’re not feeding their baby. This is wrong though because colostrum comes out in small amounts. It definitely meets a baby’s needs in spite of its subtleness.

Some adults eat bovine colostrum as it’s a potent nutritional supplement for those who are physically active. Likewise, this substance is of great help in the treatment of Crohn’s disease, oxidative stress, and ulcerative colitis. As if that wasn’t enough, it strengthens the immune system.

Situations Where You Should Avoid Breastfeeding
Do you know when you should avoid breastfeeding? Find out here which diseases mean you shouldn't breastfeed. Don't miss it! Read more »
Link copied!
Interesting Articles
Babies
Guidelines to Introducing Complementary Feeding

Hip dysplasia is a congenital disorder, which means that it appears at birth. This disorder affects the hip joint and…